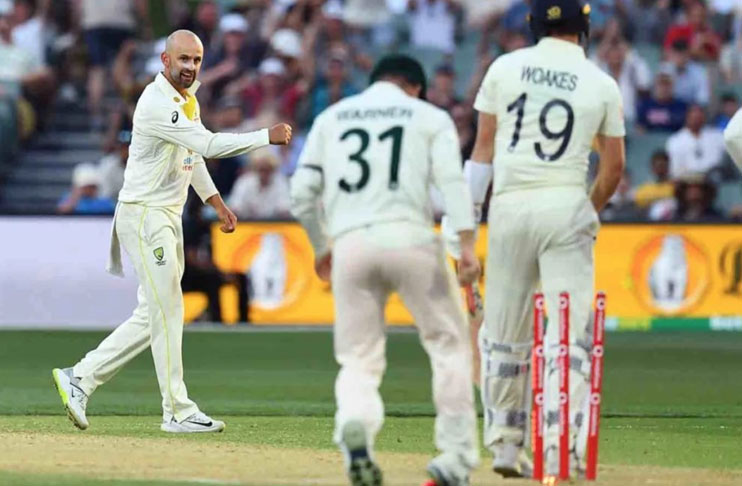 England were staring down the barrel of another chastening defeat Saturday, dismissed for 236 then forced to watch as Australia batted again and stretched their lead in the day-night second Ashes Test at Adelaide.

Joe Root and Dawid Malan had survived the opening session of day three unscathed, building a 128-run stand as they chased Australia's first-innings 473 for nine declared.

But it all came crashing down after the dinner break with both players removed in quick succession, Root for 62 and Malan for 80, sparking a collapse that saw England slump from 150 for two to 236 all out.

Making matters worse, they did so against a second-string attack with Pat Cummins and Josh Hazlewood both missing.

Stand-in Australian skipper Steve Smith could have enforced the follow-on, but chose to rest his bowlers and send in the openers to turn the screw with two days left.

They negotiated some 75 minutes for the loss of David Warner for 13, needlessly run out after a disastrous mix-up with Marcus Harris, who remains unbeaten on 21.

Nightwatchman Michael Neser was on two as Australia reached 45 for one, building their lead to 282.

Hostile pace from Mitchell Starc and Nathan Lyon's dangerous spin did the damage to England, complemented by Cameron Green, who bagged Root for the second consecutive time.

England crashed by nine wickets in the first Test at Brisbane and if they go 2-0 down in Adelaide the Ashes are as good as gone, needing to win all three remaining Tests.

Australia bowled repeat maidens at the start of the second session and Root looked increasingly uncomfortable against Green, who was starting to find movement with the pink ball.

Having passed 1,600 Test runs in a calendar year -- only the fourth player in history to do so -- he poked at a Green delivery and got an edge to Smith at slip, leaving him still searching for an elusive first-ever century in Australia.

Malan soon followed, slashing at a Starc thunderbolt that took a nick, again into Smith's safe hands. Malan has now scored nine Test 50s but only converted one into a century.

"We let it meander a little bit through the first session," Starc said, while heaping praise on Green.

"He's a serious talent for a young kid, he's a great addition to our bowling attack, he was extremely good in that session after the break."

Ollie Pope survived a bat-pad review but only lasted two more balls, charging down the wicket to Lyon and edging to Marnus Labuschagne at short leg on five.

Jos Buttler fell without scoring to Starc and England trudged off to tea on 197 for six.

It didn't take long for Australia to clean up the rest with Chris Woakes and Ollie Robinson also undone by Lyon, and when Ben Stokes was bowled by Green for 34, it was all but over.

England had resumed at 17 for two after losing openers Rory Burns (four) and Haseeb Hameed (six) to a fiery 40-minute spell from Starc, Neser and Jhye Richardson under lights on Friday evening.

Root strode out on five, alongside Malan on one.

They had perfect early batting conditions on a flat pitch and Root settled quickly, slamming a well-timed drive for four to boost his confidence.

Starc was hit for 11 off his first over and the pair quickly brought up their 50 partnership.

Malan completed his 50 with a single off Neser, while Root hit Richardson to the boundary to reach his 52nd half-century.