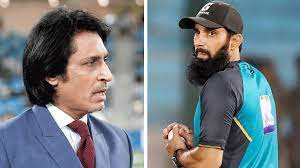 Pakistan's head coach Misbahul Haq in a virtual press conference on Tuesday, contradicted former cricketer Ramiz Raja's stance on Pakistan playing lowly Zimbabwe, saying that it was necessary for the sport's growth for these teams to obtain opportunities to become stronger.

Raja stated that such one-sided matches are a joke and it will force fans to watch other sports, instead.

“Some people are of the opinion that when a weak team plays a strong one, you need to focus on what you learn from it rather than the outcome of the match. You learn from the stronger team’s process and the way it adapts to the changing situation of a game. But I don’t think Zimbabwe learned anything from this series because they were continuously dominated by Pakistan. Also, there was no difference in their performance in the second Test as compared to the first one,” said Raja on his official YouTube channel.

“Such mismatch series should not take place. Test cricket is already under pressure and very few people watch it. If you show them such one-sided matches, then they will switch to watching football or other sports. Three-day Test match is a joke,” he said.

The head coach of Pakistan believed that a self-centered mentality would stymie the sport's global growth and would be unfair to emerging teams.

“You can’t just think about yourself when playing cricket. If we do that I think it is an injustice to the sport and would hamper its development. Whichever teams are strong currently, just like New Zealand is at the top, whoever is not at the top was a starter and a weak team during the initial stage of their development. How will they improve unless they play and gain exposure?” Misbah said.

“I don’t think this should be the mindset that we don’t allow these teams to compete. The real reason for the absence of that quality is because they are not getting that kind of cricket,” he added.

The 46-year-old coach, however, did acknowledge that Pakistan needed to play more matches against the top-ranking sides of the world in order to improve further.

“It is another thing that we should be playing against the top teams as much as we can. You always gain a lot by playing against sides that are better than you. You learn a great deal and the team improves a lot as well. I think it is the same. When we play top teams we gain a lot just like teams below us do when they play us,” he said.