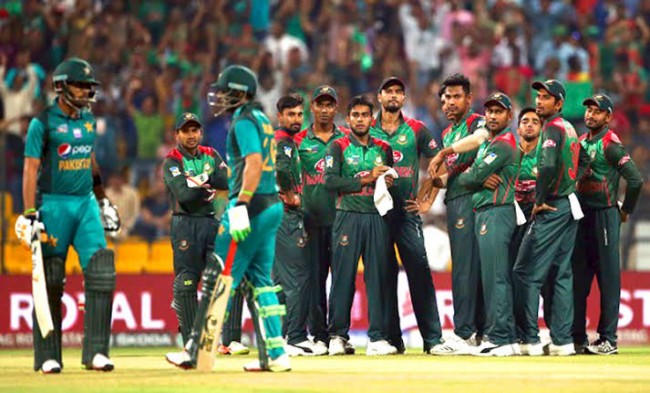 Bangladesh will complete their upcoming tour of Pakistan in three legs, said Pakistan Cricket Board official on Tuesday.

The announcement removes all the uncertainty regarding Bangladesh’s upcoming tour of Pakistan as both boards were unable to come to a consensus regarding it that started after Bangladesh refused to stay there over seven days time.

BCB president Nazmul Hasan said that they are ready to play only three Twenty20 internationals against Pakistan in their upcoming tour as government is reluctant to provide security clearance for long period due to the prevailing unrest in the Middle-East.

BCB came up with the proposal after PCB proposed BCB to play the two-match Test series first and later take part in the three-match T20 series in a convenient time, precisely ahead of the next T20 World Cup and was waiting for a response from BCB.

The visitors are scheduled to visit Pakistan in January-February for a full-fledged tour comprised with two Test and three T20’s but doubts were raised about its future before the International Cricket Council Chairman Shashank Manohar in Dubai solved the matter on Tuesday afternoon.

The Chairman and Chief Executive of the Pakistan Cricket Board today reached consensus with the Bangladesh Cricket Board on the upcoming series, which will be part of the Future Tours Programme. The process was facilitated by the International Cricket Council Chairman Shashank Manohar,’’ PCB stated in their official press release on Tuesday.

According to the revised arrangement, Bangladesh will play three T20Is in Lahore from 24-27 January.

They will return to Pakistan for the first ICC World Test Championship fixture, to be held from 7-11 February in Rawalpindi.

Post the HBL Pakistan Super League 2020, which concludes in Lahore on 22 March, Bangladesh will visit Pakistan again and will play an ODI in Karachi on 3 April and second ICC World Test Championship fixture from 5-9 April.

PCB Chairman Ehsan Mani said that he is happy with the outcome as that help cricket to resume in their nation.

“I am pleased that we have amicably achieved a resolution that is in the best interest of this great sport as well as both the proud cricket playing countries. I also want to thank ICC Chairman Shaskank Manohar for the leadership he provided and ensured the sport continues to grow and thrive in the two countries.”

“It is a win-win outcome for both the boards. I am glad that the uncertainty around the series is now over and we can start planning for the smooth delivery of the matches. Bangladesh will visit Pakistan thrice, which should give them the comfort that Pakistan is as safe and secure as any other cricket playing country,’’ said PCB Chief Executive Wasim Khan, who also attended Tuesday’s meeting at the ICC headquarters.

“The split series across three venues will also provide fans and followers to watch live in action their favourite players and support good cricket from either side.”