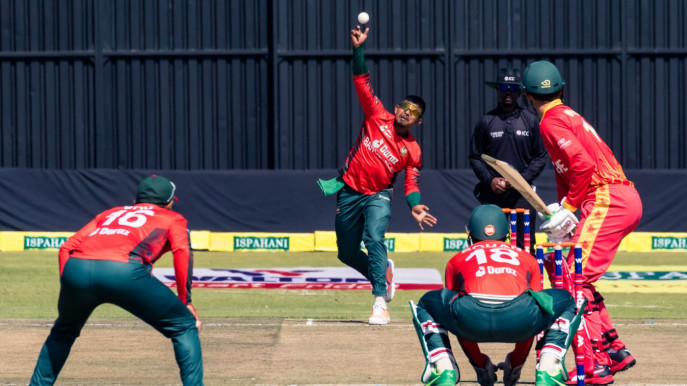 Spin-bowling all-rounder Mosaddek Hossain, who had never taken more than two wickets for Bangladesh in a T20 match, wreaked havoc with his Zimbabwe five victims in the second T20I of a three-match series.

Bangladesh convincingly chased down Zimbabwe's 136-run mark in the second T20I at the Harare Sports Club Wednesday, leveling the series at 1-1.

Faced with the modest target, Bangladesh were always ahead on run rate thanks to an impressive start propelled by opener Litton Das, whose 56 off 33 balls included two sixes and six fours.

Player of the match Mosaddek felt fantastic after his majestic spell and ready to clinch the series.

"I feel fantastic. When I am bowling I always think of bowling dot balls so I followed the plan strictly. We decided to start with spin so when I bowled I started with the right areas," said Mosaddek.

"We were looking to restrict Zimbabwe to 150 or 160 runs. When you lose five wickets in the powerplay, it will be difficult to score more than 150,”

"Bangladesh have the hunger to win the last match, we are confident now. Hopefully it will be a good match for us" he added.

Tigers' all-rounder also became the first off-spinner from Bangladesh to bag a fifer in T20Is.