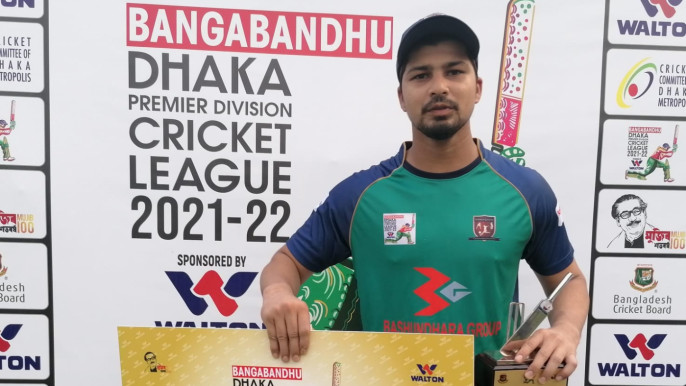 Sheikh Jamal Dhanmondi Club defeated Rupganj Tigers in a Super League match in the Dhaka Premier League (DPL) on Tuesday at the Sher-E-Bangla National Cricket Stadium thanks to Nurul Hasan Sohan's century. Sheikh Jamal chased down 248 with an over to spare, riding on Sohan's undefeated 118-ball-132.

At one point, Sheikh Jamal was down to 81 for five. The departed batters included opener Saif Hassan, captain Imrul Kayes and Mushfiqur Rahim, who played for Mohammedan in the initial stage of the tournament, and Indian recruit Parvez Rasool.

Sohan paired up with Mehidy Hasan Miraz, and the two batted together for 25.4 overs, putting on a match-winning 130-run stand. Miraz's 43 was the second-highest score in the innings.

Sohan hit his century off 110 balls soon after Miraz was dismissed, and he went on a tear after that. With the help of three fours and three sixes, the next 32 runs were scored in just eight balls. Sheikh Jamal needed 22 off the last two overs at one point, and Sohan took 26 off Mukidul Islam Mugdho's 49th over. Sohan's 132 not out was studded with 10 fours and five sixes.

Earlier, Rupganj Tigers posted a total of 247 for six thanks to Zakir Hasan's 75 and Pakistan's Saad Naseem's 50. Miraz picked up three wickets.