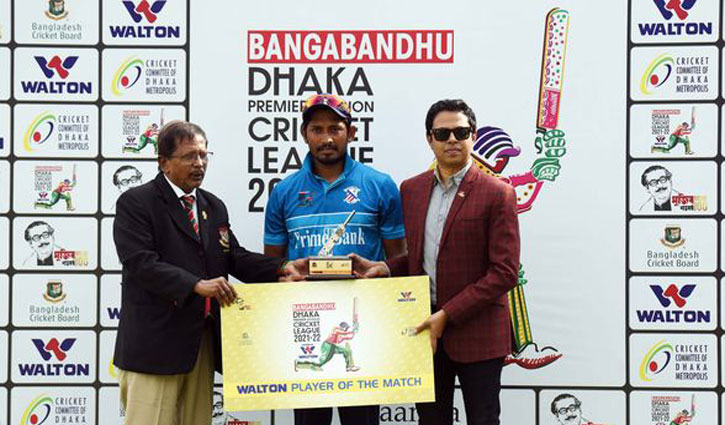 Favorites Abahani were defeated by Prime Bank Cricket Club by 142 runs in their first encounter in Mirpur as the super league stage of the ongoing Dhaka Premier League (DPL) kicked off on Monday with all six teams competing on the first day.

Prime Bank scored 273 for 9 in their first innings, thanks to Anamul Haque Bijoy's 77 off 85 deliveries.

Bijoy has been in outstanding form throughout the competition, and he contributed yet another valuable innings to help his team win.

In his innings, he hit seven boundaries and three maximums at a strike rate of over 90. With this, he became the tournament's leading scorer, with 800 runs from 11 innings, surpassing Naeem Islam's 749 runs.

For Abahani, their foreign recruit Dhananjaya de Silva picked up 3 wickets for 57 runs.

Chasing 274 was a difficult challenge for Abahani because they kept losing wickets from the start. Rakibul Hasan, a left-arm spinner, took the first three wickets, reducing Abahani to 3 for 20.

Liton Das remained at the crease for a while, but he received no help from the other end.

Abahani were down to 56 for 6 at one stage. Mosaddek Hossain Saikat became the lone warrior in the end. He hit a quickfire 63 off 57 deliveries, but it was just enough to narrow the defeat.

Bijoy was adjudged man of the match for his 77-run innings.

In the day's other matches, Sheikh Jamal Dhanmondi Club sealed a 72-run victory over Gazi Group Cricketers, and Legends of Rupganj beat Rupganj Tigers by 55 runs.

Tags: Dhaka Premier League,
Up Next