Bangladesh have climbed to the top of the ICC Cricket World Cup Super League (CWCSL) after clinching the Afghanistan series 2-1.

Tigers won 10 games in the CWCSL 2020-23 out of 15 matches, taking their points tally to 100 after an emphatic 88-run win over Afghanistan in the second ODI of the series.

Bangladesh dethroned world champions England to earn the top spot. England stands second at the table with 95 points and is followed by India, Ireland, and Sri Lanka. Bangladesh has also become the first team to breach the 100-point mark in the CWCSL.

Bangladesh’s returned to international fixtures with the series against West Indies. Their CWCSL 2020/23 journey started with a 3-0 series win over West Indies in January 2021. Tigers dominated the series, with the West Indies failing to cross the 200-run mark in all three games.

Bangladesh’s were clean sweep to New Zealand 0-3 in their first away tour. Bangladesh were beaten convincingly in the opening ODI, they put up a better performance in the second game. However, Tom Latham’s century helped the hosts defeat Bangladesh by a massive 164 runs in the final ODI.

Bangladesh bounced back with the Sri Lanka series at home. They registered yet another series win at home with the help of Mushfiqur Rahim in the first two games. He scored 84 and 125 runs respectively. Sri Lanka were beaten in the first and second ODIs and won the final ODI by 97 runs.

Tigers thrashed Zimbabwe 3-0 in the away series with Liton Das and Shakib Al Hasan in great form. Which was their third CWCSL series win.

Bangladesh defeated Afghanistan taking an unassailable 2-1 series lead at home. However, the visitors prevented Tigers to whitewash as they stun the host taking a 7-wicket win in the final ODI. 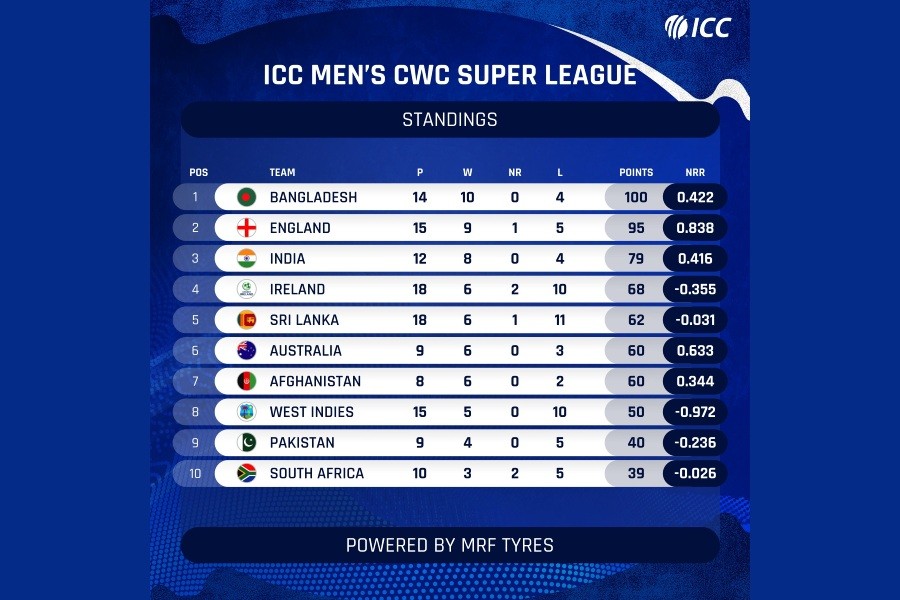 Bangladesh will play three more ODI series in the CWCSL cycle — South Africa (away), Ireland (away) and England (home) — they have placed themselves in a strong position to qualify automatically for the 2023 Cricket World Cup in India.

Apart from India, who qualified for the World Cup as hosts, the top seven teams from the CWCSL will directly qualify for the World Cup while the remaining teams will have to go through qualifying round to book a spot in the final group stages.

Tags: Bangladesh, CWCSL,
Up Next