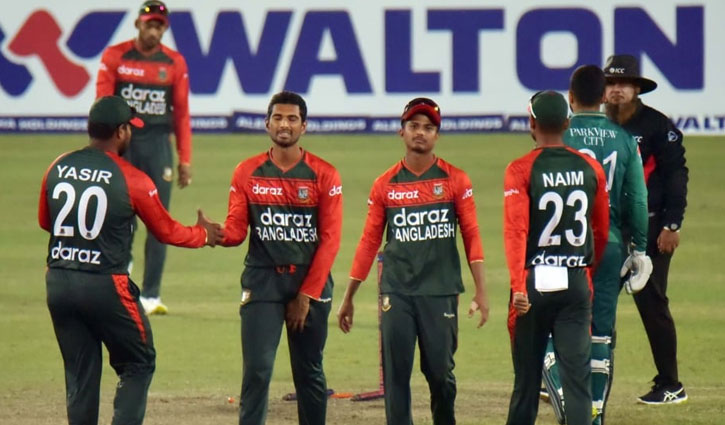 Mahmudullah, Bangladesh's T20I skipper, shrugged off the controversies which happened in the final over of Pakistan's chase in the series' third and final game at Sher-e-Bangla National Cricket Stadium on Monday. Bangladesh lost by five wickets in the game, but only after a series of nail-biting circumstances.

Bangladesh needed to defend eight runs going into the last over. For the first time in the game, off-spinner Mahmudullah entered the bowling attack and shook Pakistan batting.

With set batsman Haider Ali and Sarfaraz Ahmed in the middle, the first ball of the over went for a dot, and both batters were bowled in the next two deliveries, giving Mahmudullah a hat-trick.

Iftikhar Ahmed, the next batter, whacked Mahmudullah's third delivery over the bowler's head for a six. In the next ball, Mahmudullah bounced back hard and dismissed Iftikhar - Bangladesh now had to defend two off the final ball of the game.

At this stage, drama between the two teams ensued as Pakistan batter Mohammad Nawaz pulled away from the strike, his arms crossed. Mahmudullah bowled a straight ball that hit the stumps, however it was bowled from well behind the umpire. Mahmudullah had a word with Nawaz, asking him something.

The drama continued when Mahmudullah refused to let the re-delivery of the final ball at the last possible time.

Pakistan, on the other hand, had the last laugh as Nawaz held his nerve to hit a boundary and deny Bangladesh a rare triumph at SBNCS.

Mahmudullah later said he was satisfied with the answer coming both from Nawaz and the on-field umpire.

“The conversation with the umpire was he [Nawaz] moved at the very last moment. So, I asked the umpire if it was a fair ball. Nothing more than that. Umpire's call is final and we do respect that,” Mahmudullah said after the match.

With the series loss, Bangladesh has now lost eight consecutive T20 matches, including five in the Super 12 stage of the just concluded T20 World Cup.