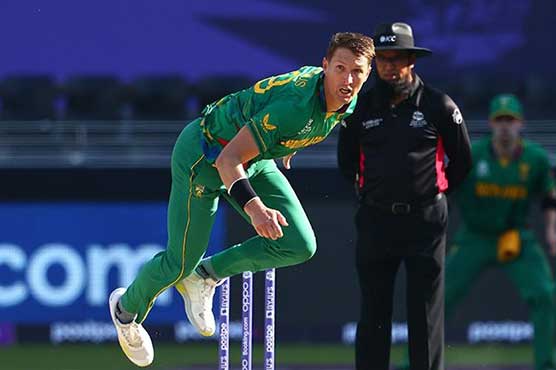 South Africa's Dwaine Pretorius is happy doing the "ugly job" of death bowling at the T20 World Cup as he seeks to make up for lost time in his on-off career.

The medium-pace bowling all-rounder has six wickets so far in the tournament after the Proteas recovered from an opening loss to Australia to beat West Indies and Sri Lanka.

At 32, Pretorius appreciates that his chances with the national team are precious.

"If I can do a job for the team and put us in a better situation, I'm willing to do that ugly job if you want to call it that," said Pretorius on Monday ahead of Tuesday's clash against Bangladesh in Abu Dhabi.

"It's something that doesn't always necessarily look the prettiest but it's very effective. And I've built my whole career on that."

Pretorius almost didn't make the World Cup as he injured a rib -- taking a catch -- and then tested positive for Covid-19 earlier this year.

He has got used to such setbacks.

After two knee surgeries early in his career he put cricket on hold to finish a degree in accounting.

He only made his international debut in 2016 when he was 27.

At the World Cup, South Africa have had to overcome the controversy over wicketkeeper-batsman Quinton de Kock refusing to take the knee and pulling out of the game against West Indies.

De Kock eventually apologised with Pretorius insisting that the squad is as united as it ever has been as they chase an elusive world title.

"This team, we've been together for quite a while now. That's probably one of the biggest advantages we have when it comes to COVID and bubble life.

"You're really forced to spend a lot of time together. And you start realising how much it actually means to each other to be playing for your country."

For Bangladesh, meanwhile, representing their country has once again proved too heavy a burden.

They squeezed into the Super 12 after losing to Scotland and have lost  all of their three second round matches, to Sri Lanka, West Indies and England.

"Obviously the boys are gutted. It's been a tough couple of days," said Bangladesh's South African coach Russell Domingo.

After facing South Africa, Bangladesh will finish their World Cup against Australia on Thursday.

Domingo, who will be without injured star all-rounder Shakib Al Hasan for the two remaining games, believes Bangladesh have not been as woeful as some critics believe.

Whatever the deluge of criticism coming his way, Domingo will not be distracted as he has forsaken social media.

"Most of my social media when I was involved was on fishing," he said.