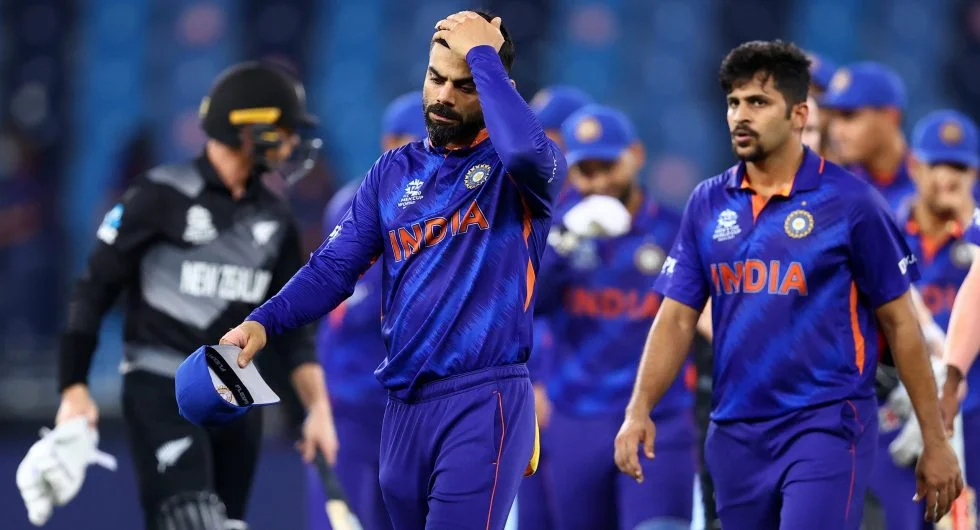 India captain Virat Kohli admitted his team was "not brave enough" after an eight-wicket rout by New Zealand left their Twenty20 World Cup hopes hanging by a thread on Sunday.

Fast bowler Trent Boult and leg-spinner Ish Sodhi shared five wickets to restrict India to 110 for seven after being invited to bat first in the Super 12 clash in Dubai.

Skipper Kane Williamson and Daryl Mitchell, who made 49, put on 72 runs for the second wicket as the Kiwis romped home in 14.3 overs and handed India their second straight loss of the tournament.

Jasprit Bumrah denied Mitchell his maiden fifty but the wicket proved a minor blemish for New Zealand, who bounced back from their opening loss to group-toppers Pakistan.

India, who lost their first Super 12 match to Pakistan by 10 wickets, are in danger of missing the semi-finals.

They have no points from two games while old rivals Pakistan lead the way with six points and Afghanistan have four after three games each.

"I don't think we were brave enough with bat or ball," said Kohli whose team will face Afghanistan, Scotland and Namibia in their remaining games.

Only the top two make the semi-finals.

"We didn't have much to defend but we weren't brave when we walked out to field. When you play for the Indian cricket team you have a lot of expectations - not just from fans, but players as well," he added.

"So there's always going to be more pressure with our games and we've embraced it over the years."

Williamson hailed his team as they collected their first win.

"A fantastic all-round performance from us against a formidable India side," he said.

"We were able to build pressure throughout and the way the openers came out really set the platform."