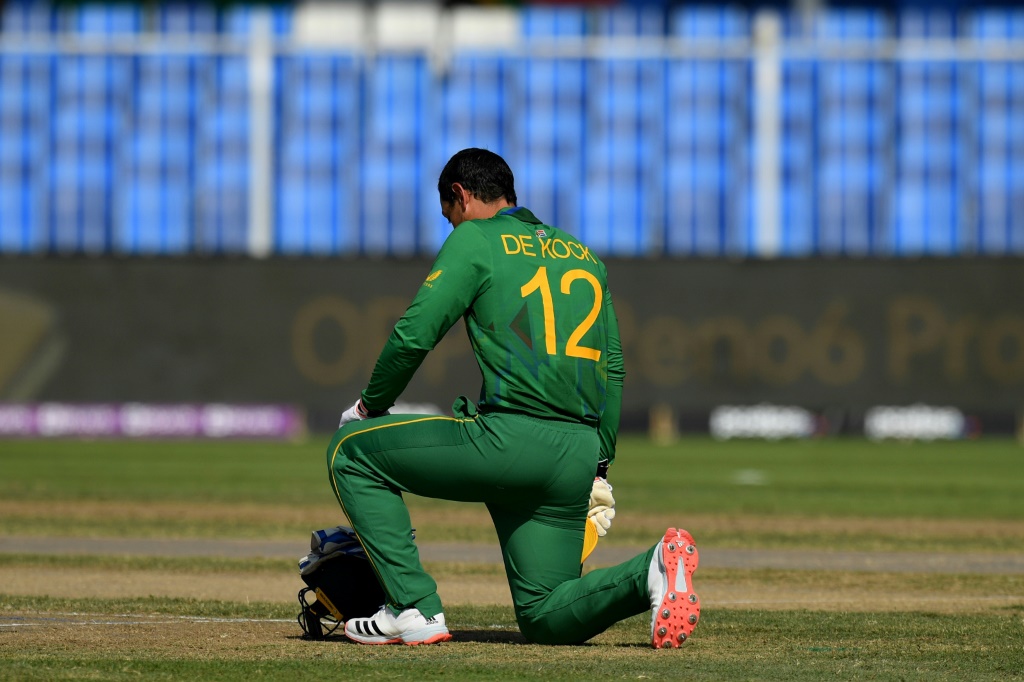 Quinton de Kock took the knee along with his South Africa teammates ahead of their Twenty20 World Cup clash against Sri Lanka on Saturday after the wicketkeeper-batsman returned to the side.

The star player had opted out of South Africa's previous match on Tuesday over his refusal to follow the anti-racism gesture but later apologised and said he would be "happy" to do it.

De Kock got down on one knee at his wicketkeeping spot before the start of the Super 12 match in Sharjah with all the other Proteas players supporting the movement from their position on the field.

This remains a first for South African cricket which has been divided over the issue of anti-racism as De Kock and a few others had previously refused to take part in the gesture that has become a regular feature in most sporting events.

The players, barring De Kock, stood in unison for the first time in the match against holders West Indies after the national cricket board ordered its players do it.

Pictures had emerged from the team's first game against Australia on October 23 where some players knelt and some stood.

De Kock remained the only change in the Proteas team with Heinrich Klaasen making way for the senior wicketkeeper-batsman.

"The team is feeling much better than we were a couple of days ago. Quinton is in a much better state," Bavuma said at the toss.

De Kock's last-minute pull raised a stunned South Africa and the cricket world and the former captain said sorry in a statement on Thursday.

"If me taking a knee helps to educate others, and makes the lives of others better, I am more than happy to do so," said De Kock.

Sri Lanka remain unchanged from their loss to Australia in. They won their opening Super 12 match to Bangladesh before going down in the second.

Skipper Dasun Shanaka said their familiarity with the Sharjah stadium gives them an advantage over the Proteas.

"We've played two games (in Sharjah) and we've had some exposure here so it might be advantage," he said.