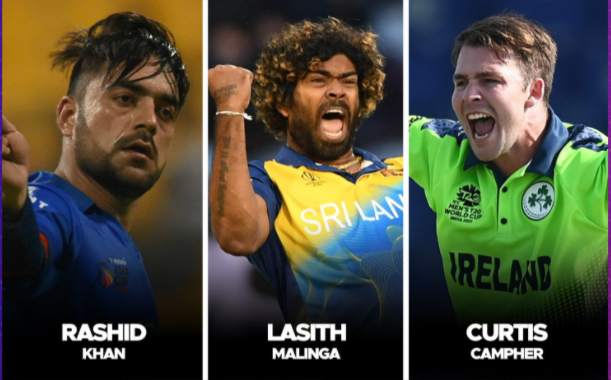 Ireland seam bowler Curtis Campher on Monday became only the third man to take four wickets in four balls in a Twenty20 International.

The 22-year-old Campher sent back Colin Ackermann, Ryan ten Doeschate and Scott Edwards for a hat-trick and then bowled Roelof van der Merwe in a sensational over in a World Cup match against the Netherlands.

The Afghanistan leg-spinner took four in four against Ireland in the third match of a T20 series at Dehradun in India in February 2019.

Rashid dismissed Kevin O'Brien, George Dockrell, Shane Geftake and Simi Singh before he ended the game with figures of 5-27.

Afghanistan won the match by 32 runs.

Malinga finished the game with figures of 5-6.

The Sri Lankan also took four-in-four against South Africa in the 2007 50-over World Cup in Guyana.