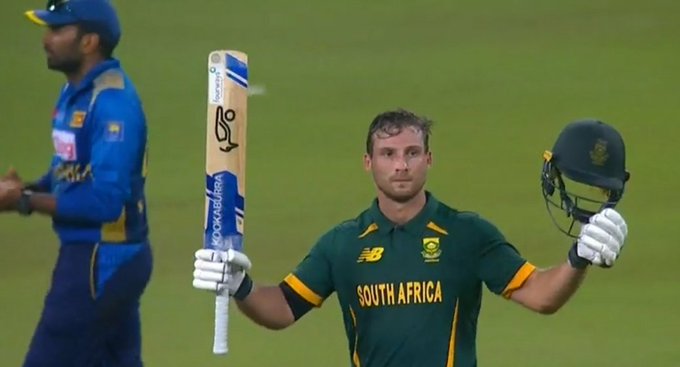 Opening batsman Janneman Malan hit 121 to set up a comfortable 67-run series-levelling win for South Africa in the rain-hit one-day international against Sri Lanka on Saturday.

South Africa scored 283-6 in 47 overs of the reduced match with opening batsman Malan scoring his third ODI ton after the tourists elected to bat first in Colombo.

Sri Lanka were bowled out 197 in 36.4 overs after a DLS revised target of 265 from 41 overs following a second rain interruption.

Keshav Maharaj led the side to the comeback victory after they lost the opener and regular skipper Temba Bavuma, who was ruled out of the limited-overs series with a broken thumb.

Malan, though, remained the hero after he battled cramps in his 135-ball knock laced with nine fours and one six.

He built partnerships including a second-wicket stand of 96 with Reeza Hendricks, who made 51, after a 90-minute delayed start to the game.

Malan and Hendricks, who was one of the three changes in South Africa's team for this match, mixed the right dose of caution and aggression and hit seven boundaries between them.

Malan reached his ton in the 43rd over as he put on an attacking partnership of 86 off 54 balls with Heinrich Klaasen to take the attack to the opposition bowlers.

Pace bowler Dushmantha Chameera broke the stand to send back Klaasen, for 43 off 27 balls, trudging back to the pavilion and got Malan lbw on the next delivery.

Sri Lanka's reply was hit by three early wickets including two in one over by pace bowler Kagiso Rabada, who sent back Avishka Fernando for eight and Bhanuka Rajapaksa for nought.

Charith Asalanka tried to make Sri Lanka fight back with his 77 and two partnerships including a 64-run fifth-wicket stand with skipper Dasun Shanaka, who made 30.

Shamsi took down both the batsmen and innings folded soon after a quickfire 36 from Chamika Karunaratne.

The third and deciding ODI is on Tuesday at the same venue.