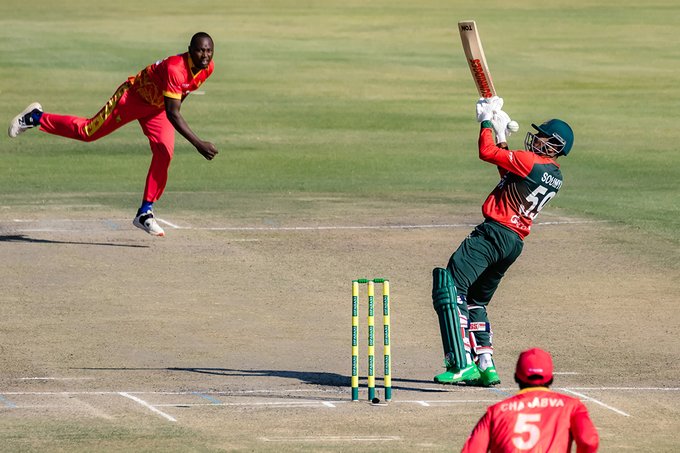 All-rounder Soumya Sarkar's 68 off 49 balls, which included nine fours and a six, set the tone for Bangladesh's pursuit of Zimbabwe's 193 for 5. Shamim Hossain gave the final touch as Bangladesh triumphed by four wickets with four deliveries to spare.

Mohammad Naim, the Tigers' opener, was dismissed early after attempting to hit Muzarabani over mid-off but was caught by the fielder. Soumya Sarkar was still getting his bearings, but he managed to keep up with the task during his first 30 deliveries.

Shakib Al Hasan was the one attempting to speed things up, and two sixes off Luke Jongwe in the eighth over saw Bangladesh reclaim control. Shakib mistimed one in the same Jongwe over and ended up with a 13-ball 25.

Soumya pushed with Mahmudullah Riyad on the opposite end offering a steady hand. In the 14th over, with Bangladesh at 140 for 3, the two put up 63 runs off 35 deliveries before Soumya was holed out at far off as he tried to go big against Jongwe.

Afif showed promise with a first-ball six, but his innings were cut short after only five deliveries when he was bowled by Wellington Masakadza. With 40 runs needed off the last four overs, Shamim Hossain struck Blessing Muzarabani for four in the 17th - before hitting the last three deliveries of Dion Myers for four to put the game out of reach.

After a 28-ball 34, Mahmudullah departed in the 19th over, nicking a Muzarabani delivery, but Shamim saw the match out with an unbeaten 31 off 15 deliveries, striking six fours as Bangladesh won the match and the series 2-1.

Earlier, a great effort by the Zimbabwe batsmen enabled them to post 193/5.

The only batsman to go wrong was skipper Sikandar Raza, who was out for a duck in the first innings and was run out for four in the second.

Madhevere was caught at short third man by Shariful Islam off the first ball of the 16th over after miscuing a reverse sweep. He had knocked six fours.

Naim flicked the ball back at deep midwicket, and Shamim stretched to take it. Chakabva struck six sixes before being bowled by a sensational catch. Only Soumya has impressed with the ball, taking two wickets in five balls and finishing with 2/19.