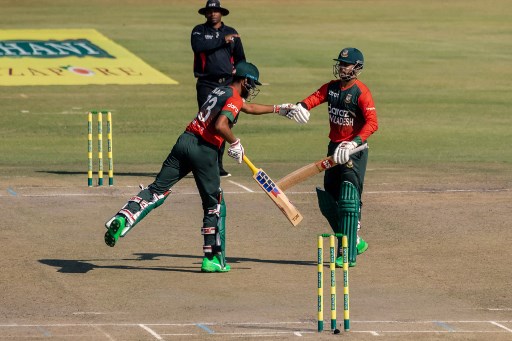 Soumya Sarkar and Mohammad Naim both scored fifties in a record opening T20 stand for Bangladesh, which helped the Tigers chase down Zimbabwe's 152 and win by eight wickets in Harare Thursday.

Naim finished the job with a 51-ball 63 that included six fours as Bangladesh took a 1-0 lead in the series in their 100th T20I encounter.

Regis Chakabva struck with a superb run out to dismiss Soumya in the 14th over, flipping the ball quickly with a no-look toss to dislodge the bails as Soumya failed to complete a two and was dismissed for 50 off 45 deliveries.

Soumya began slowly but steadily asserted his supremacy over the course of an innings that featured four fours and two sixes. On the other hand, Naim found his stride in the fourth over, hitting three fours off Richard Ngarava.

After Soumya's departure, Naim completed his fifty and Bangladesh was in cruise control.

Captain Mahmudullah (15) returned by a direct hit run out from Muzarabani’s throw, while Nurul Hasan Sohan was unbeaten with Naim for 16 runs off 8 and finished the game with a commanding victory.

Earlier, after winning the toss, Zimbabwe got off to a flying start with the bat, scoring 91 runs for two wickets in the opening ten overs. Through their pace bowlers, the Tigers' pacers were able to slow things down. In the next nine overs, eight Zimbabwe wickets fell for 61 runs as the hosts were bowled out for 152 in nine overs.