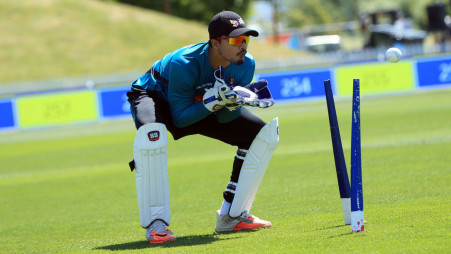 Bangladesh's key player Mushfiqur Rahim will miss the ODI and T20 series against Zimbabwe owing to family reasons. In his absence, Bangladesh captain Tamim Iqbal believes wicket-keeper batsman Nurul Hasan Sohan is one of the contenders for a spot in the XI, although he has not confirmed.

Sohan has been impressive with the bat in domestic cricket for the last few seasons. He has also flashed with the bat in the recently concluded Dhaka Premier League (DPL).

During the pre-match conference on Thursday [July 15], Tamim said, “Sohan has done very well. Not in just one tournament, he has been doing well in the previous 4-5 tournaments. That is why he has been included in the team. I can't say whether there will be a place in the XI or not. But he is one of the contenders for a place in the XI,”

“If there is a chance, if there is a spot where he bats, of course ... I have confidence in him. I'm sure he'll do well if given the chance. The way he is training is great. Any captain would be happy to have him in the team,” he added.

Bangladesh ODI captain Tamim Iqbal is surprised over the decision of Zimbabwe Cricket not announcing a squad for the ODI series, despite having less than 24 hours left for the first game.

“I’m surprised. There are not even 24 hours left for the match. Usually, at this time we have team meetings, batting meetings, bowling meetings. If we don’t know the team, how are we supposed to play? It's surprising,” Tamim said.

"We have no idea who we're playing against." I can't answer your question right now since I'm not sure who will be playing against us. The match begins in less than 24 hours, but the team has yet to be announced,” he added.