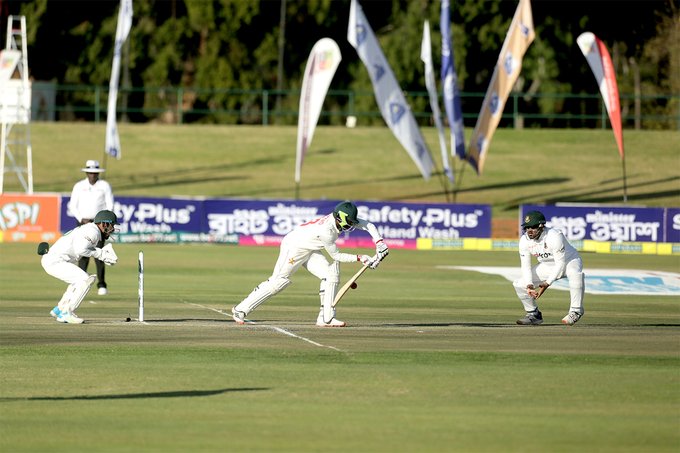 Bangladesh built a formidable platform of 468 runs on the second day of the one-off Test in Harare, with to career-best scores from Mahmudullah and Taskin Ahmed during their 191-run ninth wicket stand. On the other hand, Zimbabwe got off to a flying start in their reply, reaching stumps on 114 for 1 after 41 overs.

The opening stand of Milton Shumba and debutant Takudzwanashe Kaitano contributed 61 runs before skipper Brendan Taylor and the debutant Kaitano finished out the remaining overs.

Bangladesh Ace all-rounder Shakib Al Hasan after a poor batting display, grabbed the only Zimbabwe wicket of the day, trapped Milton into LBW for 41 runs.

Shakib drifts this full delivery in from wide of the crease, beat Shumba in the air. It's too full to be playing that as he looked to sweep across the line and is trapped plumb in front.

But Mahmudullah and Taskin will be remembered for their ninth-wicket stand, which is currently the second-highest in Test history. They smashed Mahmudullah and Abul Hasan's Bangladesh record of 184 runs for the ninth wicket set in 2012.

Mahmudullah scored 150 runs off 278 balls, including 17 fours and a six. Taskin's 75 came as more of a surprise, but he batted like one of the regulars, striking eleven fours in 134 balls.

Bangladesh had added 174 runs in 43 overs to their overnight score of 294 for 8 in 83 overs earlier in the day. After Donald Tiripano's two late wickets, Mahmudullah and Taskin had been batting together since late on the first evening.