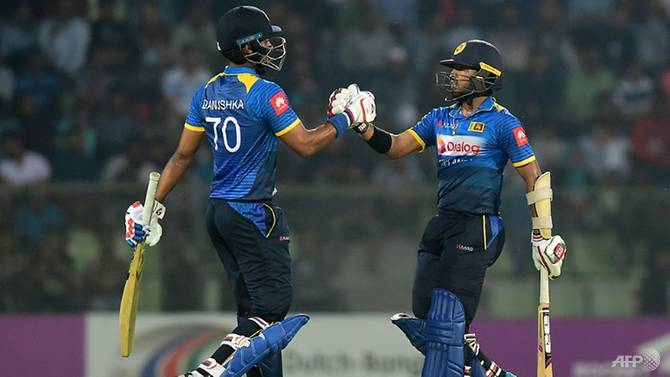 Three Sri Lankan cricket players ordered to leave the tour of England on disciplinary grounds will be dropped from a home series against India in July, officials said Wednesday.

Sri Lanka Cricket officials said an inquiry into how they left the team's pandemic isolated hotel in England would start after their mandatory two-week quarantine.

None will be included in the three one day internationals and three Twenty20 games to start July 13.

"They are likely to get a minimum one-year suspension if found guilty of several breaches of their contract," one official told AFP, speaking on condition of anonymity.

The trio was also pulled out of the three-match one-day international series against England after they were seen breaching their bio-secure bubble ahead of the first ODI in Durham.

Mendis and Dickwella were seen smoking in the streets of Durham, where they were based ahead of the ODI series.

In a second video on social media, Gunathilaka is seen joining the pair, violating the coronavirus rules of their stay.

England won the first ODI on Tuesday by five wickets. The second ODI is due to be played Thursday with the final on Sunday.

After Sri Lanka's whitewash in the T20 series against England, their fifth consecutive series defeat, disgruntled fans launched a campaign to shun the team on social media.

The hashtag #unfollowcricketers began to trend on Facebook on Sunday as thousands of fans boycotted the social media pages of Mendis and Gunathilaka, reports said.

Fans were also sharing memes asking each other not to watch the national team on television.