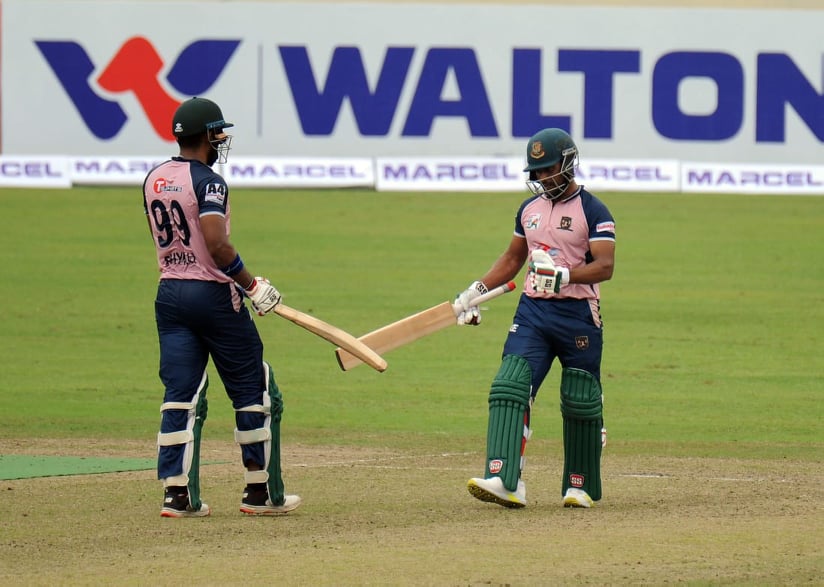 Sheikh Jamal chased down the target of 165 runs with ease as the captain Nurul Hasan Shohan’s cameo innings of 44 off 17 propelled the side to clinch the match with 11 balls and seven wickets in hand.

Veteran player Mohammad Ashraful could not prolong his innings as he departed with only 5 runs. Another opener Shykat Ali (60) and Imrul Kayes (44) made a strong partnership of 100 runs for the side. Imrul was castled by Nahidul Islam caught by Rubel Hossain , he faced 40 balls to score 44 runs and Shykat played swashbuckling innings of 60 off 36 deliveries including six fours and three sixes.

Then, Shohan’s cameo innings of 44 runs came from 17 balls hitting two fours and four sixes. He remained unbeaten on the pitch. Rubel Hossain, Shoriful Islam and Nahidul Islam picked up one wicket each.

Mithun remained unbeaten on 67 runs off 42 balls, struck seven fours and two sixes. While, Raqibul’s 34 came from 19 balls aided four boundaries and a six. Skipper Anamul played an innings of 27 runs in 28 deliveries.

For Sheikh Jamal, Elias Sunny took a couple of wicket and Ziaur Rahman picked up a wicket.

The first match of the Super League between Gazi Group Cricketers and Prime Doleshwar Sporting Club has been postponed again due to continuous rain. Before the suspension, Gazi Group lost 4 wickets in 12 overs to score 73 runs. However, the match will be played again on Monday [June 21].