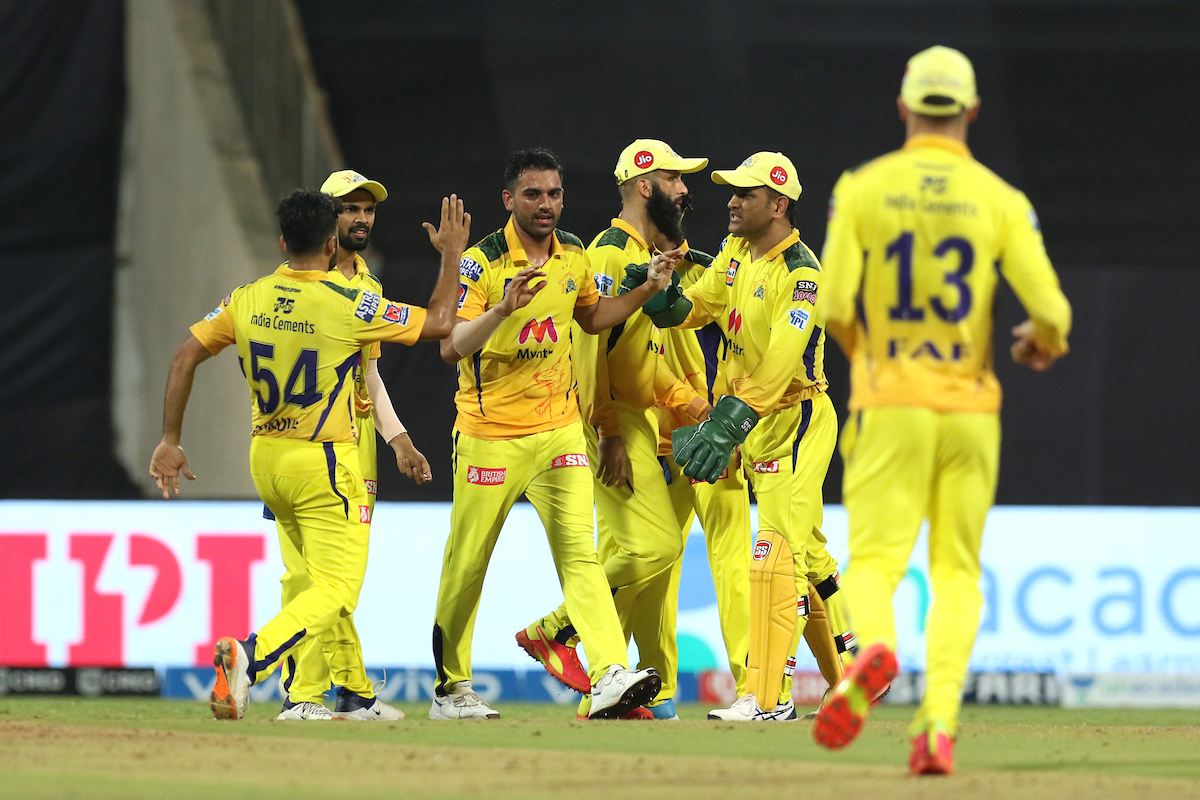 Kolkata Knight Riders (KKR) took on Chennai Super Kings (CSK) at the Wankhede Stadium in Mumbai which ended in a thrilling fashion.

KKR won the toss and elected to field first. KKR added Sunil Narine and Kamlesh Nagarkoti in the playing eleven instead of Shakib Al Hasan and Harbhajan Singh. On the other hand, CSK also made a change to their winning combination as Lungi Ngidi came in place for Dwayne Bravo.

Opener Ruturaj Gaikwad (64) scored a sublime fifty and CSK posted 54 runs in the powerplay. Faf du Plessis (95) took a bit of time in the middle and allowed Gaikwad to play his shots as well. Meanwhile, Varun Chakravarthy (1-27) provided the first breakthrough as Gaikwad finding Pat Cummins (0-58) at deep midwicket after a slog sweep.

Moeen Ali (25) did well with the bat. He hit Sunil Narine (1-34) for two successive deliveries before being stumped by Dinesh Karthik. MS Dhoni (17), however, promoted himself and came to bat with 3 overs left to play. The CSK captain had a shaky start as he got an edge that went to the boundary rope.

He finally hit Pat Cummins for his first six in the tournament and also managed to hit a boundary against Sunil Narine for the first time. But he had to go after a magnificent grab by Eoin Morgan at the cover. However, CSK managed to put up a massive total of 220 on the board.

While chasing, KKR had a rather forgettable start. Deepak Chahar, who claimed a four-wicket haul against Punjab Kings in their last game on the same pitch, did exactly the same and dismantled the KKR top order. He first removed Shubman Gill, who fell for a first-ball duck. Nitish Rana, Eoin Morgan, and Sunil Narine were all removed by Chahar and failed to contribute much.

Later, Lungi Ngidi joined the party and removed Rahul Tripathi within the powerplay. KKR were reduced to 31-5 in the sixth over as well.

However, it was not the end but a new beginning of the game one can say. Andre Russell, the big-hitting all-rounder who came to bat at No.7, didn't waste time in the middle and took on every bowler he faced. His onslaught left the opponent struggled in the middle.

Alongside Dinesh Karthik at the other end, they brought up the 50-run partnership very soon. He registered his fifty in just 21 balls and went berserk and smashed Shardul Thakur for 24 runs in his way to fifty. Howveer, his onslaught came to an end when he misjudged a delivery on the leg stump by Sam Curran (1-58) that hit the stumps. Karthik, on the other hand, tried to keep the scorecard moving but was trapped before the stumps by Ngidi.

Meanwhile, the pace spearhead Pat Cummins (668) took the game to another level with a blistering fifty out of which 30 came off a single over of Sam Curran. However, he didn't get proper support from the tail who failed to stay long in the crease. With two runouts at the end, CSK registered a marginal win in the final over by 18 runs as well.