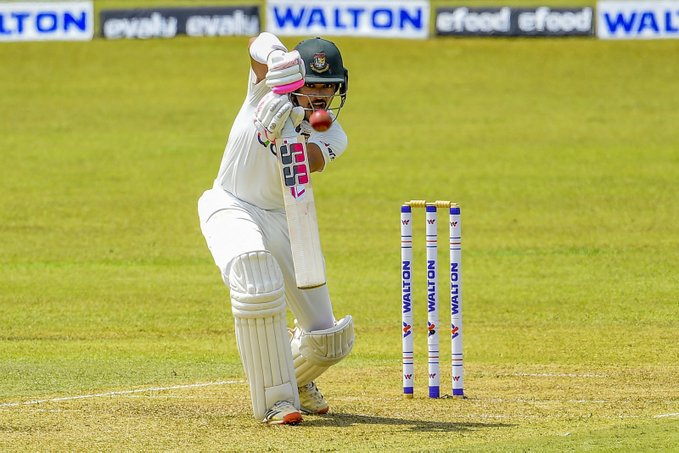 The young Bangladesh top-order batsman Najmul Hossain Shanto has scored a great century on the first day of first Test against Sri Lanka at Pallekele. Shanto got his first century in international cricket on foreign soil as he claimed this innings came from hard work.

The 22 years old batsman has been considered the future star of Bangladesh cricket for a long time. The board is also trying to make him accordingly. Shanto, who has been accustomed to being around the national team for many years, is now playing regular international matches. He is also being made the captain of various tournaments. But he was repeatedly failing to bring that form of age-based or domestic cricket to the international arena.

In the absence of Ace Shakib Al Hasan, the young batsman came to number three position and played with confidence and scored a dazzled ton today [Wednesday].

“I worked really hard in the last few months and I wasn't scoring runs, but I knew if I stick around and play my natural game I can score and I'm really happy. Mentally I'm thinking very positively and that has helped me a lot. Today I was much relaxed while batting and I wasn't thinking too much about when and where to score, my thought process was just to watch the ball and play accordingly. We have to bat well and the surface might start spinning from day 3,” Shanto said after day one.

His average in the previous six Tests is 21.90. Fifty is just one, which is against Zimbabwe at home. The ODI and T20 conditions are also bad. He has scored only 93 runs in 8 ODIs at an average of 11.62. He played 3 matches in T20 and scored 24 runs in total. But he gained a boost from today’s performance as he said he will control the excitement and continue to play like this for the rest of the match.