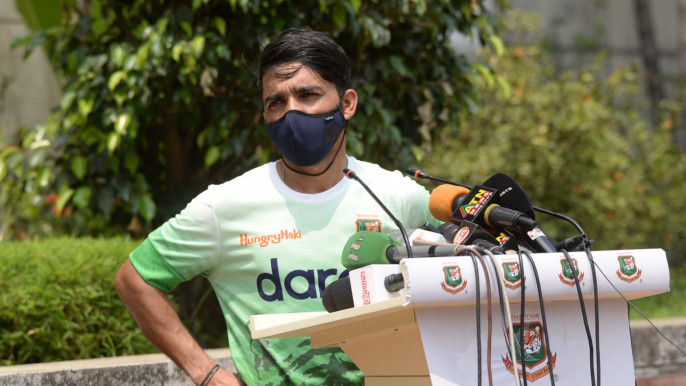 Mominul Haque, Bangladesh Test captain, has said that he and the rest of the team are not under any pressure ahead of the two-match Test series against Sri Lanka, which begins tomorrow [Wednesday].

Bangladesh had lost five of their six Tests under Mominul's leadership, including a 2-0 whitewash against a depleted West Indies side at home earlier this year.

Mominul's captaincy, as well as the performances of some of the other players and the coaching staff, were all scrutinized, and this series is thought to be a crucial test for the entire team.

During a virtual press conference Tuesday, the skipper brushed aside any pressure on himself or the squad ahead of tomorrow's first Test in Kandy.

"I'm not under pressure. None of us are. We have come here to win. We will try our best to win....If the process is right, if we can play well for five days, we will Inshallah win," the 29-year-old said.

"We are here to play. We will bowl and they will bat. We will bat and they will bowl. We will play according to our plan. That's what we are only concerned about, nothing else concerns us at the moment as professional cricketers," Mominul added.

The world hasn't been the same since the outbreak of Covid-19. Cricket, like all other sectors, has changed a lot in many ways.

Closed-door matches have taken place. Video conferencing has been used to hold press conferences. Journalists are no longer allowed to access the stadiums.

The left-handed batsman, who has scored 10 centuries in his Test career said he misses the physical press conferences.

"I, in fact, miss media and press conferences -- the face-to-face interactions. In normal times, I always used to go and attend press conferences. I really like it. So I'm not relieved, instead I'm missing the journalists here," Mominul said.