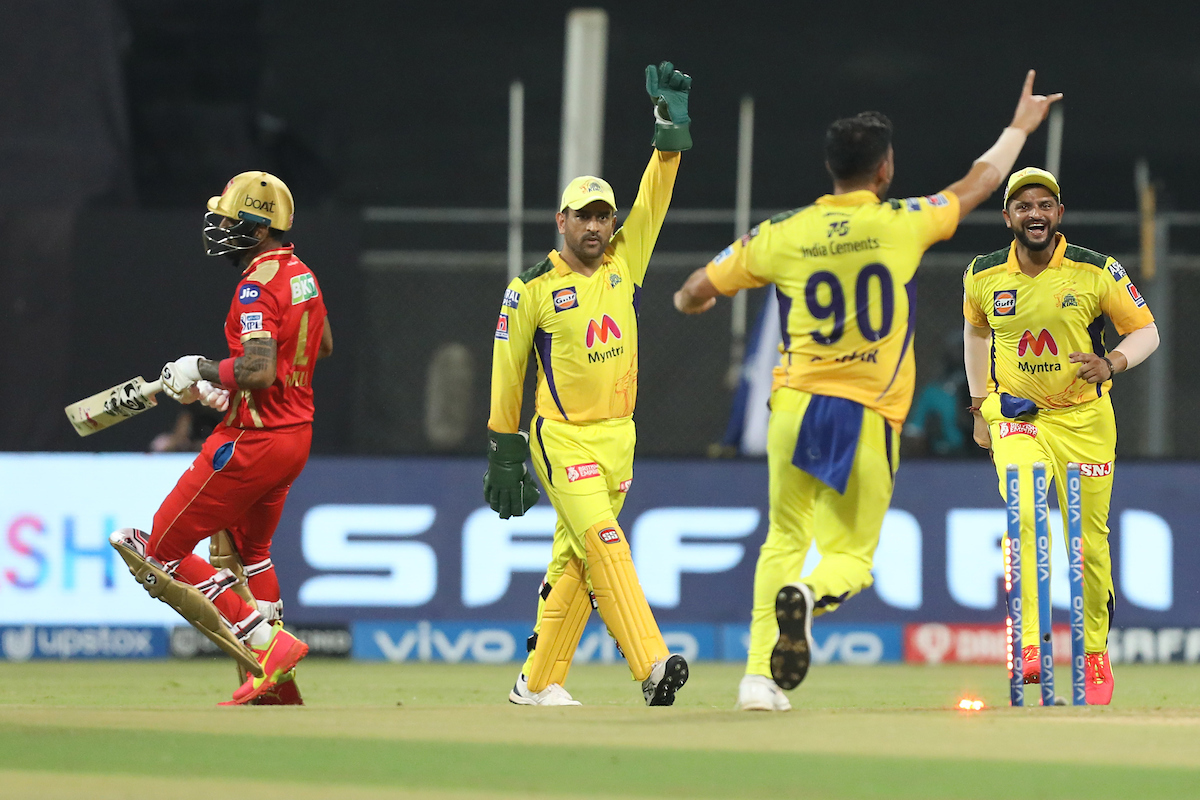 Chennai Super  Kings (CSK) have finally won their first game in the Indian Premier League (IPL) against Punjab Kings (PBKS) in the 8th match of the game at Wankhedein Mumbai on Friday, April 16.

CSK have won the toss and elected to bowl first. Both sides played with the unchanged team from their previous matches. Meanwhile, Chennai have a stunning powerplay after removing the dangerous Punjab Kings' top-order batsmen, courtesy - Deepak Chahar (4-13), who bowled four overs successively and did huge damage. Alongside his bowling, Ravindra Jadeja's exceptional fielding also removed one.

Punjab opener Mayank Agarwal (0) was out by a beautiful outswinger, whereas another opener KL Rahul (5) failed to reach the crease in front of a stunning direct hit by Jadeja. Chris Gayle (10)  too couldn't contribute much after misreading a knuckleball. And, Chahar dismissed in-form Deepak Hooda (10) and Nicholas Pooran (0) as well.

Punjab soon reduced to 26-5 when the young Shahrukh Khan (47) took the charge and rescued his side, taking it to the three-figure mark. And, stunning bowling show from Dwayne Bravo (1-10) and Sam Curran (1-16) restricted the opposition to 106-8 in their allotted 20 overs.

While chasing, Chennai too didn't get a flying start as Punjab bowled tightly in the powerplay. Their opener Ruturaj Gaikwad (5) got out in the fifth over as he was seen struggling to get going after mistiming the ball off Arshdeep Singh (1-7).

However, Moeen Ali (46) and Faf Du Plessis (36*) steadied the ship in the middle. While Ali was able to find the boundary with ease, du Plessis happily played the second fiddle and the duo took the team closer to the target. But Ali fell short of his fifty following his dismissal as he went for a slog sweep off Murugan Ashwin but Khangrabbed the catch at deep midwicket.

Suresh Raina, who scored a blistering 87 off 25 the last time, started with a boundary straight down the ground. But he fell very cheaply for 8once again to the short ball whereas Ambati Rayudu was out on a duck. Since the target was small, they didn't face another hiccup as du Plessis and Sam Curran took the side to the finish line with 4.2overs to spare.