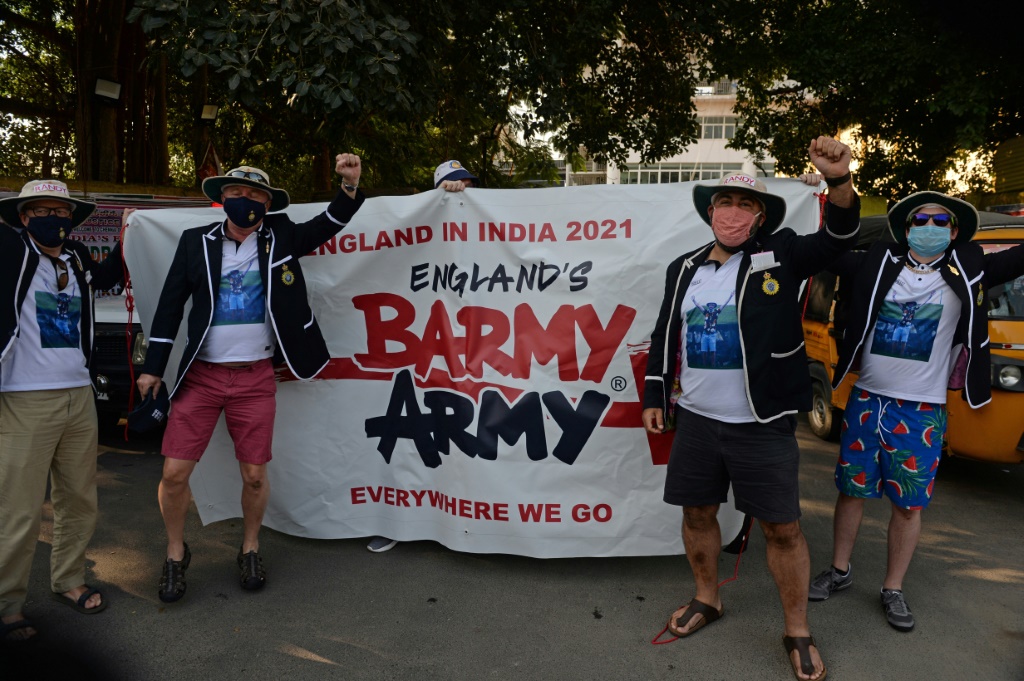 Inspired by a diehard England fan's 10-month vigil to see his team play in Sri Lanka, a group of expats have travelled across India to become the only Barmy Army members singing in the second Test.

Rob Lewis became a Barmy Army hero last month as the only England supporter present during the team's tour of Sri Lanka, after waiting 10 months in the country because of coronavirus restrictions.

His journey has pushed a group of six expats -- four Brits working in three Indian cities, an American and an Australian -- to make the journey for the match at Chennai's M.A. Chidambaram Stadium, where fans have been allowed in by authorities in the cricket-mad nation for the first time since the pandemic struck.

"We got connected to Rob through a common friend and tried to get him to India," said Londoner Joe Phelan, 47.

"The plan was to get him to the cricket ground... But because of the travel restrictions, it was just not possible."

After the England team went home from Sri Lanka last year, superfan Lewis worked remotely in the South Asian island nation as a web designer and took on stints as a nightclub DJ to get by.

His arduous bid to watch England made the group realise that as some of the few foreign nationals in India, they were in a privileged position to watch the match live.

"Then suddenly tickets became available and, really inspired by Rob and what he meant for English fans and for all cricket fans, we thought we are in India and can go," said Delhi-based Phelan.

All six wore T-shirts featuring Lewis's face underneath their matching blazers from the Delhi expat cricket club, the Viceroys, that most of them belong to.

Foreign tourists are still barred from India, leaving Phelan and the five others as the only voices backing Joe Root and his men.

The other Englishmen are Harry Martin, 30, who lives in Mumbai, Delhi-based Mark May, 58, and Simon Harrison, 35, who travelled from Hyderabad.

The tiny Barmy Army contingent will be drowned out by some 15,000 home fans, but they have pledged to be in good voice regardless.

"We will try and get some Indians to sing along with us," said Phelan.

"We'll be singing our best and I hope we have sore throats by Sunday night."

The Englishmen were accompanied by 30-year-old Matt Christensen from the United States and Australian Peter Nicholls, 44.

The Australian wasted no time in sledging his English mate Phelan as they queued to get into the raucous stadium.

"It's so rare that England does well. He (Phelan) is outside his comfort zone because England normally don't do well," he joked.

But perhaps stung by Australia's recent shock home series defeat at the hands of India, Nicholls claimed he was yet to take sides in the contest.

"I am torn, I have two daughters born in India and I have a wife born in England," he said.

"I am not sure who has more power over me."

Christensen meanwhile was soaking up every bit of the atmosphere in his first-ever live cricket match.

"I am a huge baseball fan and I know a lot of baseball has come from cricket," the American said with a smile.

"When I found out I was moving to India, I didn't have the time to study Hindi, but I knew there was another language Indians speak and that's cricket," he added.

"So I decided I am going to learn everything about cricket and I am super happy to be here."

The six men planned to be in Chennai until Sunday evening before flying home.

But Phelan said he was in touch with other India-based England fans ahead of the two Tests in Ahmedabad.

The third Test will be the first match in the western city's new stadium, the world's largest, but it is unclear if fans will be allowed.

"Whether we are there or we hand the baton to other England fans," said Phelan, "the Barmy Army will be there in Ahmedabad as well."

Tags: England, India, Test ,
Up Next