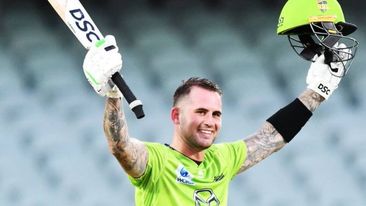 Alex Hales (110) scored his maiden century in BBL as smashed an incredible century off just 51 deliveries, hitting eight sixes and nine fours. Hales was helped by impressive contributions from Sam Billings, Captain Callum Ferguson and all-rounder Ben Cutting, as the Thunder roared their way back into the top three in the BBL.

Ferguson had a swashbuckling innings of 42 runs off 23 balls, with three boundaries and sixes. Billings and Cutting scored 33 runs off 21 and 14 deliveries respectively.

The Sixers are currently on top of the league standings, having accumulated 32 points from 11 matches. The team has won eight games with three defeats so far.

Sydney Thunder on the other hand are placed on the fifth spot on the points table. The side has earned 23 points in the same number of games, having registered six wins and five losses.