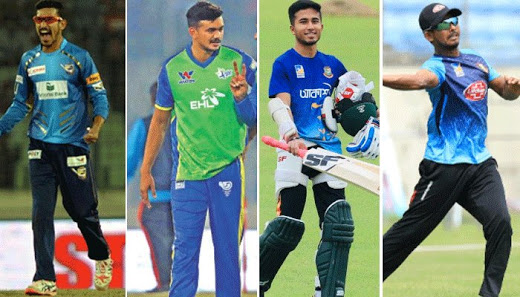 The Abu Dhabi T10 league is scheduled to commence on January 28 at the Sheikh Zayed Cricket Stadium. The fourth edition of the T-10 League will be held in the United Arab Emirates from January 26. The tournament authorities have already announced the schedule of the first round ahead of this year's event.

Six cricketers from Bangladesh are playing in T10.The Players' Draft was held on Wednesday (December 23). They are Afif Hossain Dhruv, Muktar Ali, Nasir Hossain, Mosaddek Hossain Saikat, Sheikh Mehedi Hasan and Taskin Ahmed. All-rounder Mosaddek was the first to get a team from Bangladesh in this year's T-10 league. The current champion of the tournament Maratha Arabians has taken him in the team, they also took Tiger pacer Taskin in the team.

Pune Devils included Bangladesh all-rounder Nasir in their team from the draft. The Indian-owned team has picked Nasir from the 'C' category. Earlier, the Bengal Tigers have picked up Bangladesh's rising all-rounder Afif Hossain Dhruv. There are two more Bangladeshi cricketers in the Bangladesh-owned team. They have included all-rounders Muktar and Mehdi in the team. These two cricketers had a great time in the last Bangabandhu T20 Cup.

Schedule for the first round of the T-10 League: