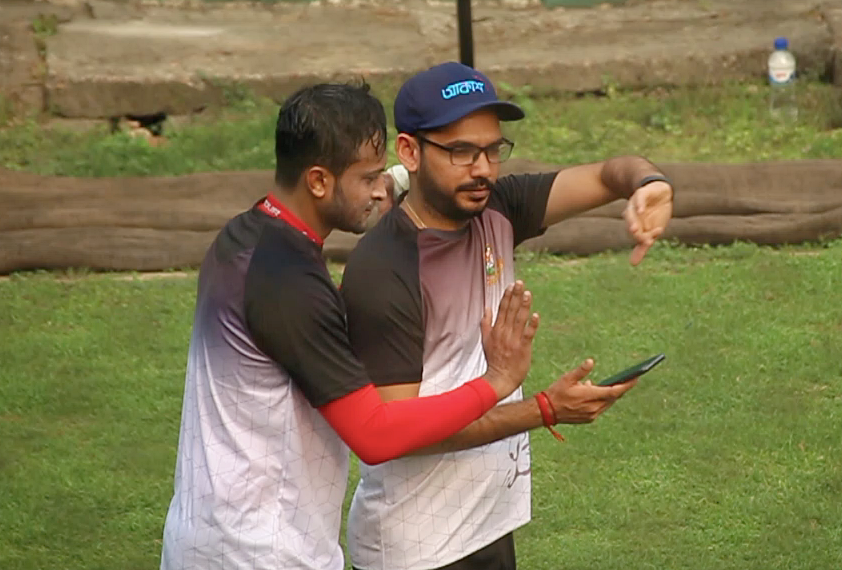 After bowling for a long time in the net, Ace all-rounder Shakib Al Hasan also worked with his batting during the practice session on Monday. He was unzipping his pads and talking to Mushfiqur Rahim, it seemed that he would not practice anymore. But ten minutes later, he got up again and walked towards the net with the ball.

He took with him the performance analyst of Bangladesh national cricket team Shrinivas Chandrasekharan. Mehedi Hasan Miraj, Nasum Ahmed, Sheikh Mehedi and Mosaddek Hossain were also bowling in that net at that time. As soon as Shakib started bowling, Srini started taking short videos with his mobile phone.

After 7-8 consecutive deliveries, Shakib himself was watching the video and trying to understand where the problem was. Seen from a distance, at first it seemed that this all-rounder might be doing something about his landing. But no, in fact Shakib was trying to deliver a new bowling technique.

Although, no clear idea was found about it, it was understood at least in a few gestures. He was trying to do something new using the middle finger, ring finger and little finger. The ring finger might play a larger role here, which could endanger any left-handed batsman.

Srini did not unleash anything specific as he told Cricfrenzy `Shakib is working on something new. For now, I want to keep it a secret. I don't want to reveal it until it is fully mastered.'

Shakib has returned to the field with a domestic tournament called Bangabandhu T20 Cup last November after a one-year ban, now he is waiting to enter the field in the country's jersey.

And in the return series, will this all-rounder give some good gifts to the country by putting the West Indies batsmen in danger with his new delivery?