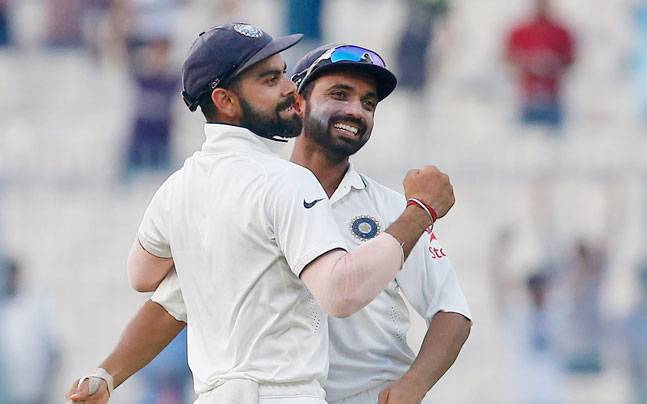 India captain Virat Kohli has backed Test vice-captain Ajinkya Rahane as he believes Rahane will do a 'tremendous job' as captain in his absence. He further added that it has always been a collective effort and not depending on any one player as well. Notably, Rahane will lead the team from the second Test as Kohli will return home for the birth of his first child with his wife, Anushka Sharma.

"We've had a lot of mutual understanding and respect over the years, we've had great partnerships based on trust. Jinx has done a tremendous job in the tour games," Kohli said in the pre-match press conference. "He's very composed and knows the strengths of our team. Our cricket has been a collective effort of the whole team, it's a cultural effort and not just about me strategising things and putting things in front of people. We already know the template we play with.”

"We're absolutely on the same page. I'm sure he'll do a tremendous job in my absence. But the focus remains for me to provide captaincy and leadership while I'm here. From then on, I'm confident that Jinx will do a tremendous job. I've said this previously as well, I feel like this is his time to really step up and perform strongly as an individual, and as a captain as well he'll do a great job. We're on the same page completely and the vision is to put in good performances and make sure we are competing every game and win the series," he further added.

It is also noteworthy that, Virat Kohli will be leading the Team in the first Test which will be a day-night affair in Adelaide. Kohli added that a pink-ball Test can have a lot of variables and that’s why a 'pre-planned' strategy might not work as well.

"Our plans are pretty much sorted and ready for all the batsmen. We have to execute those plans consistently and efficiently to get those breakthroughs and dismiss them at the right times. We're not focused on whether their players are going to start or not, we're only focused on what we can do as a team," he concluded.