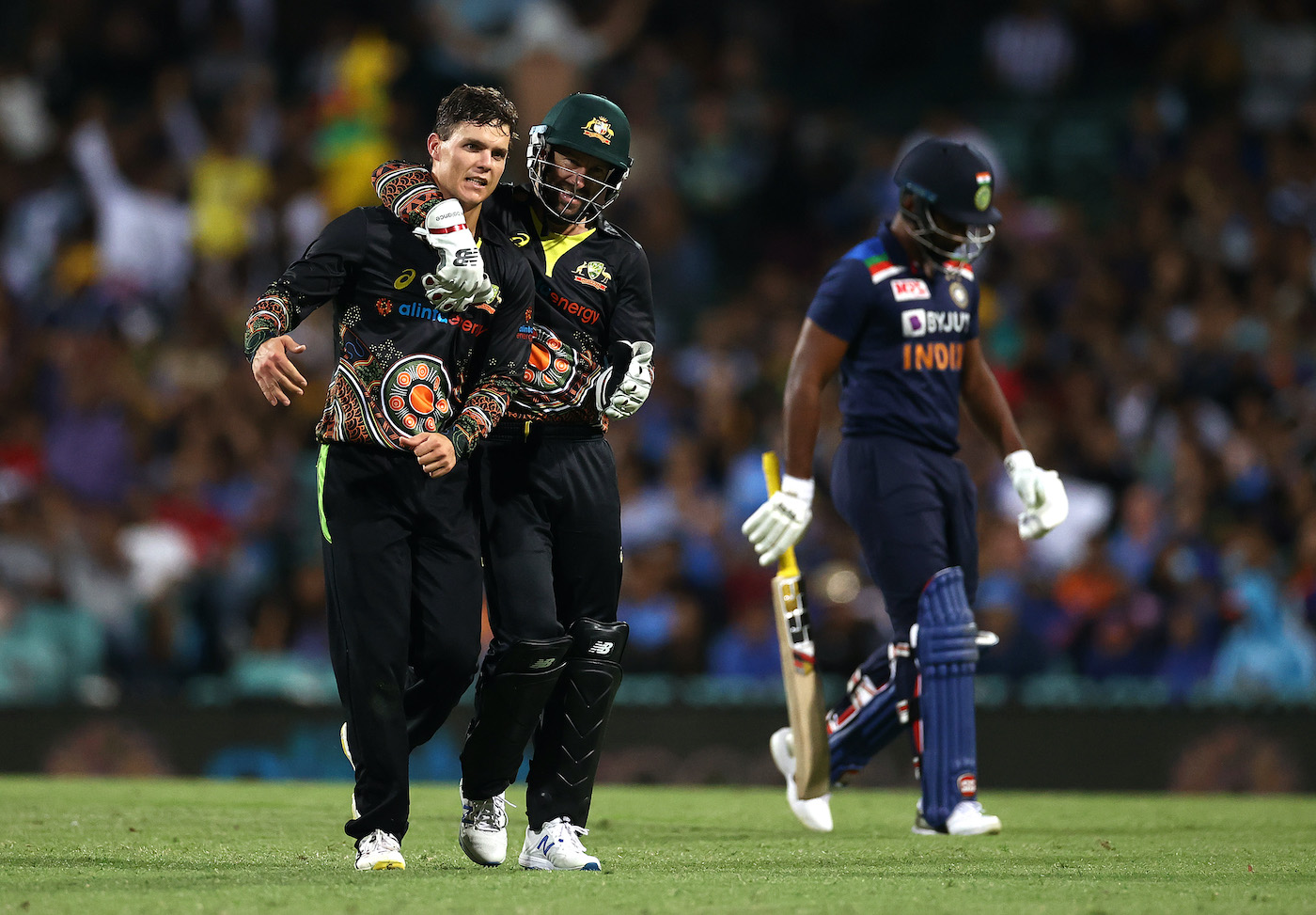 Australian bowlers did exceptionally well against Virat Kohli led India and restrict the Indian Team from a clean-sweep with a 12-run victory in the third and final T20 International in Sydney on Tuesday. Notably, India have already won the series by 2-1.

In the game, India won the toss and opted to bowl first. They soon got the success as Washington Sundar picked up Aaron Finch on a duck. However, Matthew Wade and Steve Smith steadied the ship with a 65-run stand before Smith got out for 24. Wade, who has been in a sublime form in the T20 series, smashed 80 off 53 balls with the help seven fours and two sixes as well. He punished all the bowlers with his quick pull-shot and flick whenever he got the chance.

He got great support in the all-rounder Glenn Maxwell. Although he was seen struggling a bit initially, played another destructive knock in the last six overs with a 35-ball-54 and added 90 runs for the third wicket which came in 8.4 overs. He smashed Chahal for a straight six and followed it with another into the mid-wicket as well in the 15th over.

Their onslaught set a target of 187 in 20 overs. For India, Washington Sundar claimed 2 wickets whereas Thangarasu Natarajan claimed one.

While chasing, Maxwell provided with the first breakthrough by dismissing KL Rahul for a duck. His dismissal brought the captain Virat Kohli in the middle. They both steadied the ship slowly. Dhawan, though looked in good touch, couldn’t score much as he fell for 28.

Meanwhile, the Indian captain smashed his third half-century of the series and he reached the feat off 41 balls. India was on a steady-state at that time with 92 on the board after 12 overs with eight wickets in hand.

But the 13th over witnessed a huge setback for India as Mitchell Swepson's (3/23) stunning leg-breaks reduced them to 100 for 4. While he dismissed Dhawan earlier with a half-tracker he sent Sanju Samson (10) in the dugout with a low full-toss. And soon he trapped Shreyas Iyer for a first-ball duck.

They required 88 runs in the final 7 overs with Kohli and Hardik Pandya in the crease. The target was achievable as both the batsmen were in the sublime form. While the bowlers bowled well in the middle, Kohli decided to smash Sams in the mid-wicket for a six and then another one over fine leg. The final ball of the over was gone for another six from Pandya as well.

An over before Pandya got out, he took on Tye for a four and a six. Howveer, it was Adam Zampa's leg-break forced him to hit one against the turn but eventually caught at short third-man by Finch. While his dismissal left all the pressure on Kohli, he failed to win the game for India.

Kohli smashed 85 runs off 61 balls with 4 fours and 3 sixes. Shardul Thakur tried his best with an unbeaten 17 off 7 - his effort went in vain as the bowlers held their nerve and ended the visitors' 10-match winning streak in the T20 format as well.