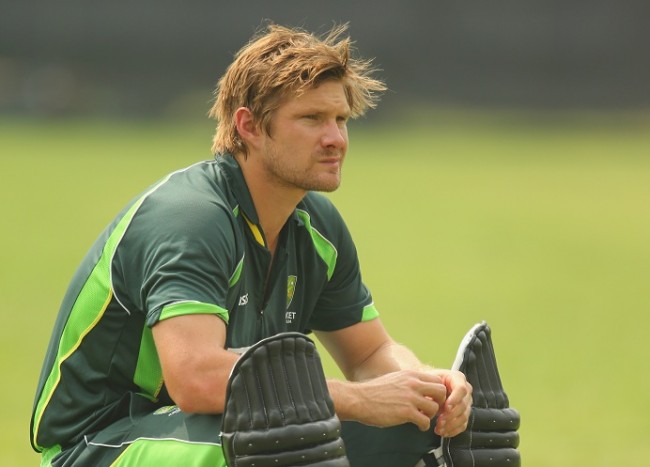 Australian all-rounder Shane Watson has announced his retirement from all forms of cricket.

The 39-year-old will hang up his boots after an illustrious career during which he won two ICC Men’s Cricket World Cups and two ICC Champions Trophy titles.

Watson, a right-hand bat and right-arm fast-medium bowler, continued to play in T20 leagues around the world since retiring from international cricket in 2016. On Tuesday, 3 November, a few days after his team, Chennai Super Kings (CSK), played their last match of IPL 2020, he confirmed that he was bringing the curtain down on 20 years of professional cricket.

"I feel crazily lucky to have lived out my dream, and then some," Watson said in a video message posted on his website. "It feels like the right time. Knowing that I've played my last game of cricket ever for my beloved CSK ... To think that I'm finishing up my playing days as a 39-year-old, after all of my injury setbacks that I had along the way, I feel so ridiculously fortunat

Watson, who began his first-class cricket career in Tasmania, made his ODI debut for Australia in 2002 against South Africa and was part of a golden era for the Baggy Greens.

He may have missed their 2003 World Cup triumph through injury, but he was crucial in their Champions Trophy title win in 2006, taking 2/11 and blasting an unbeaten 57 in the final to claim the Player of the Match award and help his side beat West Indies.

In 2007, Watson tasted World Cup glory as his side saw off Sri Lanka, and in 2009, he fired 105* against New Zealand to steer the Aussies to back-to-back ICC Champions Trophy titles, as well as another Player of the Match award himself.

The big-hitter was named Test and ODI vice-captain in 2011 and racked up his highest international score of 185* off 96 balls against Bangladesh in an ODI. In doing so, he broke a number of records for the format at the time, including most sixes in an innings, the highest score by an Australian batsman, fastest 150, most runs from boundaries, and highest score in a run chase – dethroning MS Dhoni’s 183* v Sri Lanka in 2005.

In 2012, Watson continued his incredible form, turning in four consecutive player-of-the-match displays against Ireland, West Indies, India, and South Africa at the ICC Men's World T20. After the group and Super Eight stages, he had most runs, wickets and sixes in the competition, going on to be crowned Player of the Tournament.

He picked up his second ICC CWC winners medal in 2015 after Australia defeated New Zealand. In 2016, he was named T20I captain, becoming one of just a few Australians to captain the team in all formats of the game.

Despite retiring from international cricket in 2016, Watson was named Australia’s T20I Player of the Year in January 2017.

Away from the international scene, Watson played in the inaugural Indian Premier League season in 2008 for Rajasthan Royals as he helped them win the title, while being named Player of the Tournament – an award he picked up again in 2013.

He later spent time with Royal Challengers Bangalore, skippering the side on occasions, before moving to Chennai Super Kings – smashing 80 from 59 balls as his side missed out by just a single run to Mumbai Indians in the 2019 final.

He also enjoyed spells as captain of BBL franchise Sydney Thunder, while also playing in the Pakistan Super League and Caribbean Premier League.