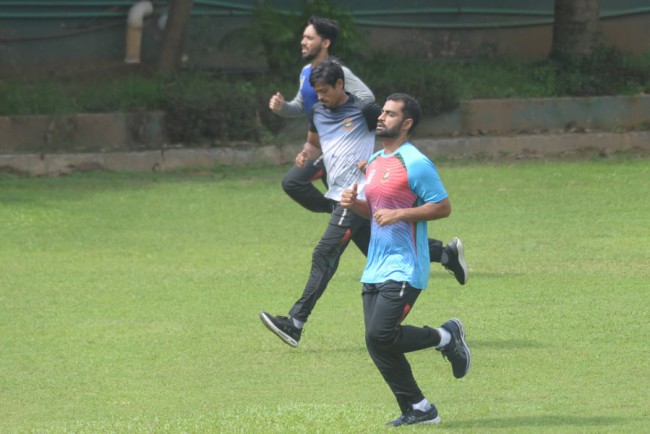 Bangladesh national cricketers on Monday start adapting with YO-YO test that will measure their fitness level in the coming days as BCB is all set to replace beep test with it.

National ODI and Test captain Tamim Iqbal and Mominul Haque along with few others gave kind of a mock test ahead of their new fitness evaluating process that is expected to be introduced soon in every set-up of BCB.

‘’We have given the test as we want to adapt with it as we are not used with it  We have given test in 40 meter while it will be shortened to 20 meter when we will take part in the YO-YO test that is expected to measure our fitness level,’’ pace bowler Abu Haider told reporters at the Sher-e-Bangla National Stadium on Monday

‘’We are looking forward to make sure that we are totally prepared before that (YO-YO test),’’ he said.

BCB had initiated the move of introducing Yo-Yo test in the High Performance Unit camp which began on October 7 that can be considered as the first step towards introducing the new method.

Both Yo-Yo and beep test are used to test a person’s aerobic capacity and endurance. It is a direct representation of individual’s cardiovascular fitness and is a perfect simulation for games which require short bursts of pace followed by a short recovery time.

A number of sports namely football, cricket, rugby use this test as a benchmark to determine an athlete’s fitness level. Invented by the Danish soccer player Jens Bangsbo, the test aims to measure the aerobic fitness levels of players by measuring the time taken by the athlete to shuttle between two markers kept at a distance (usually 20m), with a constrained recovery time and when a player fails the test the last completed level is considered as his test score.

‘’Basically the beep test is considered to be endurance test while the Yo-Yo test is considered to be aerobic-endurance test. The multi-stage 20 shuttle run test, commonly known as the beep test, is a popular field test of aerobic fitness. The Yo-Yo test is inspired by the beep test and possesses a lot of similarities, is another field test for team sports’ athletes, which is becoming more and more popular among the Test playing nations.

Both the beep and Yo-Yo tests are shuttle runs which require the athlete to run back and forth over a 20m course in time to audio signals. In both tests, athletes run to exhaustion. The scores are usually recorded as the level (or stage) achieved and a certain number of shuttles.

While there is no provision to rest in beep tests, there is a provision of taking rest in Yo-Yo test and it is considered to be the biggest difference between the two fitness tests.

There is one version of the Yo-Yo test which is essentially the same as the beep test (the yo-yo endurance test level 1), but most Yo-Yo tests feature a rest period after every 40m (2 x 20m) distance covered, compared to the beep test which is a continuous test. There are different levels of the yo-yo test, designed for fitness abilities of the athlete, which can also be used to assess different levels of anaerobic fitness.

The original objective of the beep test is to measure aerobic fitness while the Yo-Yo test was designed to be more specific to the many intermittent-type team sports and test the ability to repeatedly perform sprint intervals over an extended period.