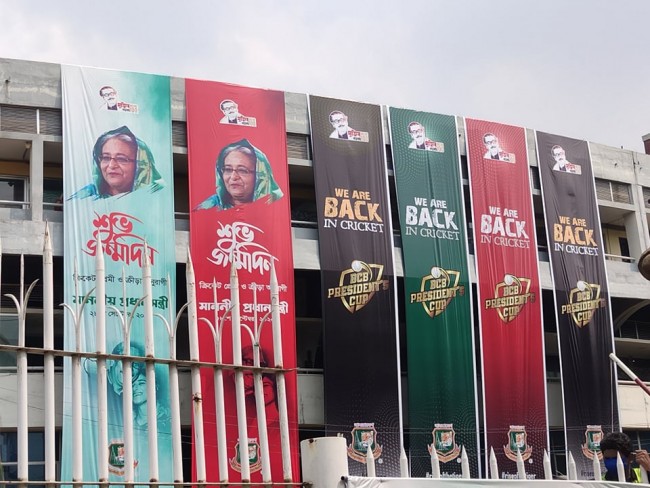 The ongoing BCB President’s Cup is evenly poised as three participating three teams are equally placed in the points table after the first phase of the double league tournament.

BCB took the initiative of bringing back competitive cricket through organizing the competition with the after corona enforced long layoff.

Tamim Iqbal is leading one side while the other two sides will be led by Mahmudullah and Nazmul Hossain respectively while national team cricketers, players from the High Performance Unit and selected members of the 2020 ICC Under-19 World Cup champion squad are featuring in the day-night competition.

In the opening two games batsmen looked to be struggling as pace bowlers dominated the show but that is not due to extra bounce rather to the slowness of the wicket considering they are used to bowl on slow wickets.

The overcast conditions also played its part as rain interrupted the games and batsmen tend to suffer more than the bowler when the play resumed.

Questions were raised about the wicket as it seemed to be two paced wickets with some deliveries coming to the bat while few deliveries are not coming at the same pace and there were few balls that were coming low to make batsman’s life even more difficult.

It was argued that lack of managing the wicket properly was the reason behind it and point were raised on SBNS head curator Gamini de Silva as he left for Sri Lanka during the start of the corona and is yet to return back from his homeland.

BCB was forced to bring Indian curator Praveen Hinganikar, who was assigned in Chattogram, to Dhaka to oversee the wicket in SBNS.

Though the condition of the wicket did not change overnight and it seemed that the third game of the tournament between Tamim XI and Nazmul XI following the same trend- a low scoring affair- but Mahedy Hasan blazed 57-ball 82 to help his side post a total of 200 runs and in the end Nazmul XI failed to topple it despite Mushfiqur Rahim scored the first century of the competition making 103 runs.

It looked if someone is ready to stay at the wicket runs will flow sooner than later and Mahedi insisted that was plan he made for him while going down to bat at number eight with the team struggling and staring at a defeat that would have made life difficult for them in the tournament.

‘’Whatever the condition of the team the plan was to play ordinary cricket for 45 to 48 overs and I thought that I will take a chance in the last two overs,’’ said Mahedi in the post match.

‘’That is what happened at the end of the day. I took a chance in the last two overs while carrying it and the innings got bigger,’’ he said.

‘’It was not possible to come so far without the help of Taijul Bhai. Wicket was going down continuously.  The partnership of Taijul bhai and mine has changed the whole game,’’ he added pointing towards his 95 runs partnership with Taijul on the ninth wicket that kept them alive in the competition.

The second phase will be beginning from today (October 17) with Nazmul XI taking on Mahmudullah XI and the former will be confident as they managed to earn their only win in the tournament over the same opponent during the opening game of the tournament.