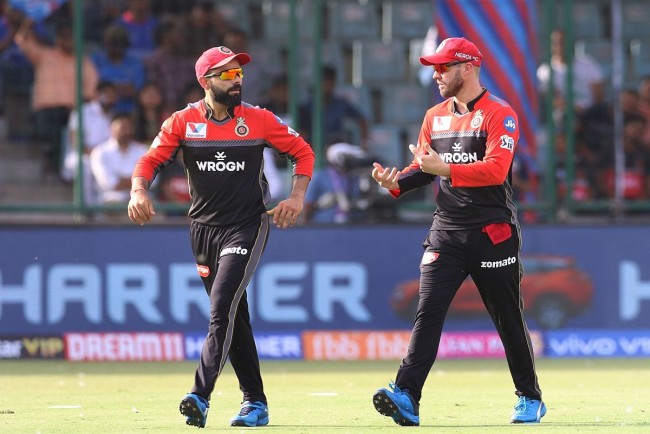 Virat Kohli led Royal Challengers Bangalore faced a defeat against Kings XI Punjab in their last game where several questions raised on AB de Villiers’ batting position as he came to bat at No. 6, below Washington Sundar and Shivam Dube.

While they lost the game by eight wickets in Sharjah, de Villiers failed to get going while batting lower down the order and fell for 2 off 5. However, batting first, RCB made 171 for 6. Left-handed Washington Sundar and Shivam Dube were sent up in the order to counter-attack KXIP’s two legspinners in M Ashwin and Ravi Bishnoi.

Meanwhile, after the match, Virat Kohli explained the reason why their key player batted at No. 6. "We had a chat, there was a message about left-hand right-hand combination because they had two leggies. Sometimes decisions you take don't come off and this was one of those nights. But we're pretty happy with the decisions we took especially in the batting. I think 170+ was a decent score on this pitch," he said at the post-match presentation.

"The idea (to promote Washington and Dube) was to get the eye in and then start hitting. But we were not able to put them under pressure. They bowled well, the pitch didn't allow us to play our shots," he further added.

However, after having a flying start, KXIP were in a mood of finishing the game fast with the onslaught of Chris Gayle. But they too faced a nail-biting scene when Gayle was out in the penultimate ball of the final over and they still needed 1 run to win before Nicholas Pooran smashed Yuzvendra Chahal for a six to seal the deal.

"It's not a great ground for bowlers but that's not an excuse. We take a lot of pride as a bowling side, but tonight was one of those nights. We have to take responsibility and apply the next time. Few positives always from the games that you lose as well and some learnings from the games you win. We now have to go back to the drawing board," he concluded.