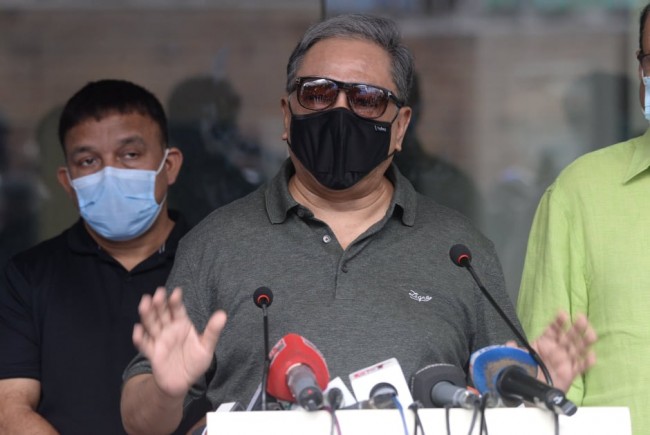 Bangladesh Cricket Board president Nazmul Hasan announced on Sunday that there will be no Bangladesh Premier League, country’s lone franchise-based T20 tournament.

Earlier, Nazmul raised doubts over the future of BPL but now abandoned the tournament for this season due to ongoing corona pandemic.

‘’BPL is not happening this year,’’ Nazmul told reporters after opening the inaugural edition of the three-team 50-over tournament at the Sher-e-Bangla National Stadium on Sunday.

‘’Let’s see it in next year. We do not want to miss any game but everything will depend on the situation and circumstances. Because whenever there is talk of BPL, there must be foreign cricketers. At the same time there is the matter of production. Now if we can do those in Bangladesh then we have no objection,’’ he said.

‘’It is a little bigger arrangement and I don't know if  we were able to handle that or not,’’ he said.

‘’We have no contact with any BPL franchise yet. Our first question is when we will be able to organize BPL and whether we are doing it or not and when possibly we can start it as that is our first issue,’’ he said.

‘’When we can start it than we will decide whether to give a new franchise or continue like this,’’ he said.

Nazmul said that they are not thinking of hosting BPL abroad due to the financial strength of the franchises and more so after learning the expenses IPL franchises bearing to take part in the tournament with all those bio-bubble in place.

‘’I don’t think it will be easy (organized outside). I tell you, when we go to run in Bangladesh (BPL), except for one or two franchises, the rest of us have a hard time to play the tournament,’’ he said.

‘’ I heard it today the bio-security belt has to be created outside say in the UK and even in Dubai for the IPL as well and I don't think it is possible for anyone. It is almost impossible for us to spend so much money,’’ he said.