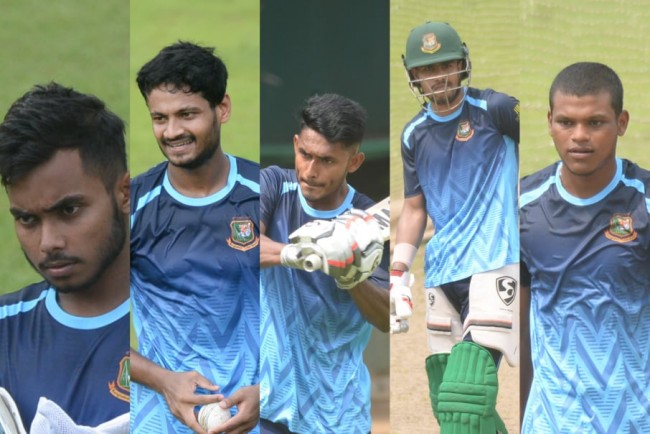 Bangladesh Under-19 World Cup winners are eyeing to make the most during their stint in the High Performance Unit.

12 members of the WC winning Under-19 squad were included in the HP squad that started recently at the BCB Academy premises.

Akbar and others began their journey in the BCB HP Unit in order to hone their skill and prepare them compete against the big brothers in the national team after the board failed to start the Under-21 platform that they promised after they returned home, due to corona pandemic.

BCB decided that they we will have an Under-21 unit as there was no platform for the Under-19 members and some of them would join the HP (High Performance squad) others would fade away in the wilderness.

The BCB decided that the Under-19 members will have special training for two years where they will work on their skills while during these two years, everyone will get TK 100,000 from the board and that hasn't been the case before.

While the Under-19 members are receiving cash, BCB failed to introduce the Under-21 platform and largely due to the unexpected corona virus pandemic.

Top order batsman Tanjim Tamim is eyeing to make the most in the HP Unit.

‘’This is a matter of feeling good. Because we have started after the World Cup. There was an opportunity to prove oneself. But unfortunately everything has stalled. The situation is  same all over the world. Now everything will start newly .  I was on a flow on that time . Now we have to try something new. Inshallah I will try to use the opportunity. I will try to go back to the form where I was in before,’’ said Tamim.

Mahmudul Joy was ecstatic to return back to the field.

‘’Inshallah after many days, the last few days I was in practice at BKSP. We tried to get back to our rhythm. Now playing with the seniors will be a little bit stressful but if we enjoy it then hopefully  will be able to get good result,’’ he said.

‘’I am not thinking too much. Yes, I am excited. But I will try to enjoy and learn as much as possible. I am not planning too much. I said, there is definitely a lot to learn. If I can see or stay with them, I will definitely learn something,’’ he said.

Left-arm spinner Rakibul Hasan is also excited to be part of HP camp.

‘’Ofcourse, this is a very good news. I am in the camp after so long. It is a pleasure to be in a tournament like this. I will try to give my best. There is an opportunity to prove ownself here.  I am looking forward to playing,’’ he said.

Apart from HP camp some of the Under-19 members are picked in the President Cup, proposed three-team ODI competition, and they are eyeing to use it as an opportunity to learn through sharing the dressing room with seniors.