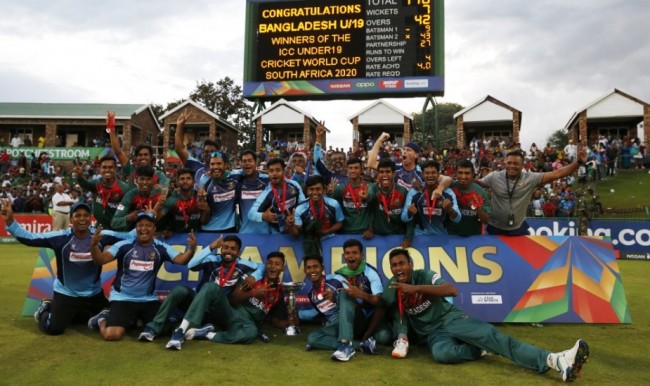 Shakib Al Hasan kept the status of the world premier all-rounder under his belt for the long time whose emergence had happened from the Bangladesh Krira Shikha Protisthan (BKSP). But this world-famous player was not a part of the world cup winning team.

Shakib’s successor, Akbar Ali and company, heralded it whose heroic knock at Senways Park at Potchefstroom in South Africa drew a successful conclusion of the world cup winning story.

Although they didn’t play any match of the extravaganza event for the youth cricketers, Prantic Nawroz Novel has witnessed every moment on the way to winning the 2020 Under-19 World Cup in South Africa. Mehrab Hossain, on the other hand, became part of the team as he went later to take part in the youth World Cup.

Those who are in the primary squad were enthralled by the stories from them in the middle of the fight of the team.

“Even though they didn’t play any match, Nabil and Mehrab were with the whole process of the team’s world cup winning. And so, they know how to win the world Cup what they shared with the next mission players,” Sazzad Ahmed Shipon, chief of the age-group selection committee.

“This year’s players know that their senior brothers won the world cup. What should be their vision for them is not being told any of them,” Hashibul Hossain Shanto, selector of the age-group selection panel said.

Age-limit permits Nabil and Mehrab to play in the next world cup in 2022. Chief selector became vibrant with Akbar Ali and the company's success chemistry. He shared his words of better feeling and said, “Nabil-Mehrab was with the entire process of the team though they didn’t play any match for the team of which they know how to win the World Cup. What they are sharing with the other players of the newly-built Bangladesh Under-19 Cricket Team. I get to understand having stayed with the players and how the other is being inspired.”

Selector Shanto, the former fast-bowler of the Bangladesh team, was with the whole team in South Africa. He was with them during the preparation mission of the team.

He is intensely monitoring the preparation for the next World Cup, which is scheduled to take place in 2022 in West Indies, at the corridor of the BKSP from where he finds out a basic problem of the new-batch players.

Focus is to defend the title. With the target, a 45-player squad has already played a slew of practice games between them. Two more matches remained. Therefore, the extended squad will be trimmed to 25-26 man squad.