Cricketers all set to enter bio bubble on September 20 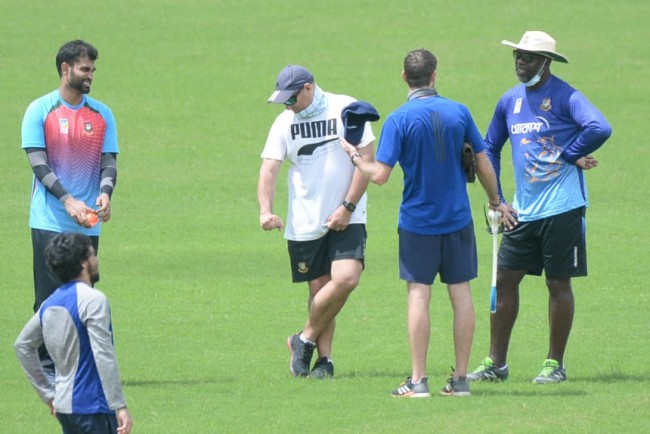 The Bangladesh cricket team is all set to enter bio-bubble environment from September 20 ahead of their Sri Lanka tour for the proposed three-match Test series.

Officials of Directorate General of Health Services (DGHS) conducted the scheduled second-phase test of the four-phased COVID-19 test for the cricketers and officials with the help of the experts of the BARDEM on Friday.

It was scheduled before accommodating the players, coaching staff and officials at Pan Pacific Sonargaon Hotel, Dhaka for the residential camp, which is slated to start on Sunday.

Two different medical teams conducted the tests as one went to the players’ home to collect their samples while the other team worked at hotel premises to collect the samples of the hotel employees, who will work with the players, coaching staff and officials during their stay at hotel.

A total of 53 individuals that included 18 players and 35 hotel staffs have been brought under the second COVID-19 test while the remaining nine cricketers of the 27-member squad that was formed to obtain governments’ orders (GO) for the Sri Lanka tour, will take part in the COVID test.

BCB already hired two floors to keep the cricketers and the supporting staff for the tour while the board officials insisted that the hotel staffs that are expected to work with the team will be living in a separate dormitory and they have completed the test of the drivers expected to carry the cricketers from hotel to the ground.

BCB is planning a week-long residential camp ahead of the tour that will mark the resumption of competitive cricket for both sides. The residential camp is set to begin on September 21. The BCB will conduct the next COVID-19 tests respectively on September 21 and 24 and the final test 72 hours before they take the flight to Sri Lanka.

‘’They will get into a bio-secured environment after getting into the hotel as there will a be a dedicated floor for us while we will be using dedicated restaurants and gym and the boys will stay restricted  in that compound. They will never go to the common places where everyone is allowed,’’ said BCB chief physician Debashish Chowdhury

‘’Those hotel staff tested negative will stay at a dormitory in hotel and they will never go to outside while we have completed the corona test of the drivers and they will stay in isolation for seven days as they will be engaged with us,’’ he said.

It was learnt BCB had called Craig McMillan and Daniel Vettori in Dhaka so that they can start doing their quarantine before heading towards Sri Lanka.

This time they will not take part but they will participate in the third-phased test.

According to officials the last two tests which are very crucial for the players because those who want to go to visit Sri Lanka have to get through the hurdle of the pass.

In addition, the first test was done 11 days back. If the tour goes ahead as planned, the cricketers will have to undergo two more tests. Bangladesh's tour of Sri Lanka, which was scheduled for July-August, was postponed because of the COVID-19 pandemic.

Bangladesh, as per the current plans, are expected to travel to Sri Lanka on September 27 for the three-Test series that is scheduled to start from October 24.