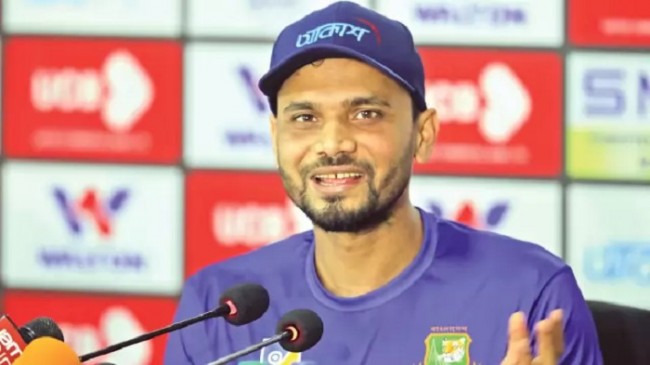 Photo: Image- Collected
|| CF Correspondent ||
The former Bangladesh skipper and also the member of parliament of Narail-2 constituency Mashrafe Mortaza has set up disinfector chamber at Narail Sadar Hospital Gate through his Narail Express Foundation.
Mashrafe bin Mortaza has been one force working against the coronavirus in the country, both as an influencer and as the member of the parliament.
The veteran right-arm pacer is being widely praised for his effort.
Recently Mashrafe came into the limelight for having setup disinfect chamber at the gate of Narail Sadar Hospital through Narail Express Foundation, a charitable organization run by Mashrafe.
Doctors, nurses, patients and journalists that are to visit the hospital will be benefited from the chamber that will help in sterilizing the human body. The locals in Narail are in praise for the initiative.

Narail Deputy Commissioner Anjuman Ara inaugurated the disinfect chamber along with presence of Police Super Mohammad Jasim Uddin and other.
This disinfectant room is seen in different countries around the world to kill any virus in the body. While entering the hospital one has to pass through this chamber, the germicide spray will be sprayed on the body. Spraying or steam is an effective method of destroying the germs, which will not get ones body wet and the germs will die. From which doctors, nurses, patients, journalists, ambulance drivers, people of come and go to the hospital all will be benefited.
Narail and Lohagara's people are very thankful for such a great step taken by their MP and his foundation.
Also Mashrafe will soon set up this disinfectant chamber at Lohagara sub-district Health Complex and for the police force who are working day and night for the safety of people in his constitutional area.
Earlier Mashrafe helped 1200 people by providing food assistance in his consistency while he also contributed 500 PPE gown to the medical officer and also introduced mobile ambulance to help the people who are afraid to visit the hospital.
Tags: ,
Up Next