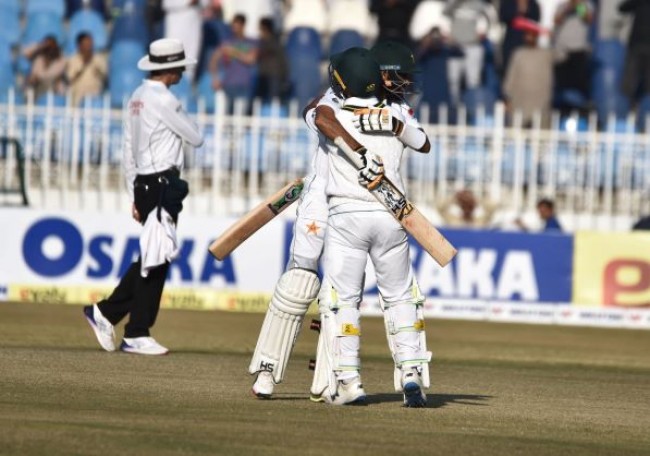 Bangladesh put themselves in tricky state after coming up with shoddy fielding and bowling that saw them Pakistan take an utter control over the game just on  the second day of the first Test in Rawalpindi on Saturday.

Before the bad light brought an end to the day, Pakistan took a commendable 109-run lead over the visitors by reaching 342-3.

Babar Azam, survived on 2, brought up his fifth century and remained unbeaten on his Test highest 143, punishing the Bangladeshi bowlers in disdain throughout the day. This is notably his third century in last four innings.

Along with him, Asad Shafiq was batting on 60. Opener Shan Masood earlier was out on exact 100, after completing his third Test century.

Bangladesh was bowled out for 233 in its first innings.

But the Tigers had a wonderful start to the day when pacer Abu Jayed Rahi had Abid Ali caught by wicket-keeper Liton Das for naught.

The joy was short-lived as Shan Masood and skipper Azhar Ali revived the innings, playing with luck and pluck. They were consistently aided by the lackluster Bangladesh bowling and put the side in driving seat in a short time.

Rahi however came up with more disciplined bowling in his second spell and rewarded with the wicket of Azhar just before the lunch break. The Pakistan Test captain made 34 off 59, laced with four boundaries.

Bangladesh could have got Babar Azam too through left-arm spinner Taijul Islam before the lunch should Ebadat Hossain not shelled the catch of him at long-off.

Babar and Masood treated the bowling, that lacked penetration with disdain to rotate the scoreboard fluently.

Taijul operated tirelessly throughout the day and got the reward when he rattled the stump of Masood after he reached his century. That also broke the 112-run partnership between him and Babar.

Masood struck 11 boundaries in a knock for which he played 160 balls.

Asad Shafiq joined Babar and kept the flow. They also kept the Bangladeshi bowlers frustrated throughout the whole last session to share a 137-run for the undefeated fourth wicket stand at nearly four-run an over.

Babar, in his scintillating 192 ball-143 not out, smashed 19 fours and one six. Shafiq was not as fluent as Babar but grinded out Bangladeshi bowling in typical manner. He sent the ball across the rope eight times for his 111 ball-60 not out.