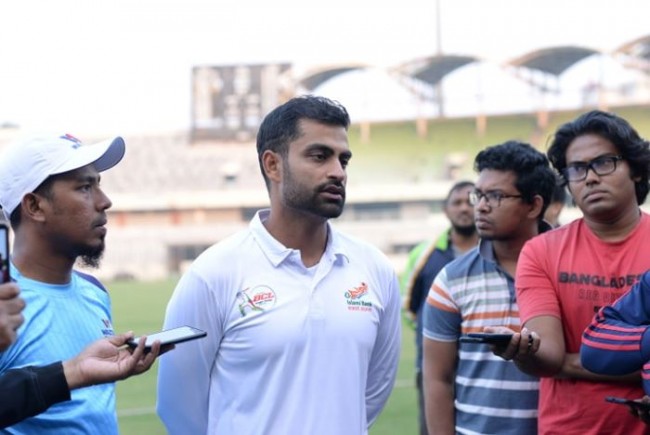 Islami Bank East Zone kept them aloft over the Walton Central on the day three of the first round game of Bangladesh Cricket League (BCL) at the Sher-e-Bangla National Cricket Stadium on Sunday after ace opener Tamim Iqbal struck a landmark triple century.

Tamim’s 334 not out, the second triple ton by a Bangladeshi batsman in the first class cricket, helped East Zone to declare their first innings on 555-2.

At stumps, Central Zone reached 115-3, still trailing by 227 runs to make East Zone batting for the second time. Central Zone earlier was bowled out for 213 in its first innings.

East Zone however made a mockery with Central Zone bowlers on day three too, with Tamim who began the day on 222, completed his triple century off 407 balls.

It was his first triple ton, surpassing his previous best 206 which he made against Pakistan in a Test match in 2015.

He then quickly went past Roqibul Hassan’s 313 to become the highest individual scorer for Bangladesh in first class cricket. Roqibul earned the feat in 2007 during a National Cricket League (NCL) game for Barishal against Sylhet.

Roqibul who is playing for Central Zone was quick to congratulate Tamim after the ace opener eclipsed him.

In his marathon 426 balls knock, Tamim smashed 42 fours and three sixes for his 334 not out—a famous number that etched in cricketing folklore due to be the highest Test score for all time great Sir Don Bradman.

Alongside Tamim, Yasir Ali was not out on 62, after sharing 197-run with Tamim for the undefeated third wicket stand. Earlier on day two, captain Mominul Haque hit 111.

With 342 runs ahead, East Zone decided to declare the innings and their bowlers made a quick response by troubling Central Zone batsmen with off-spinner Nayeem Hasan to the fore.

Nayeem claimed 2-36 while Abu Jayed ended with 1-13. Jayed made the breakthrough by dismissing Soumya Sarkar for 4. Saif Hasan and Nazmul Hossain Shanto seemed to have stabilized the things before Nayeem came to the party.

He firstly removed Saif for 33 and then got rid of Shanto for 54.

Before the bails were drawn for day three, Roqibul Hassan was batting on 17 with Shahidul Islam on 7.