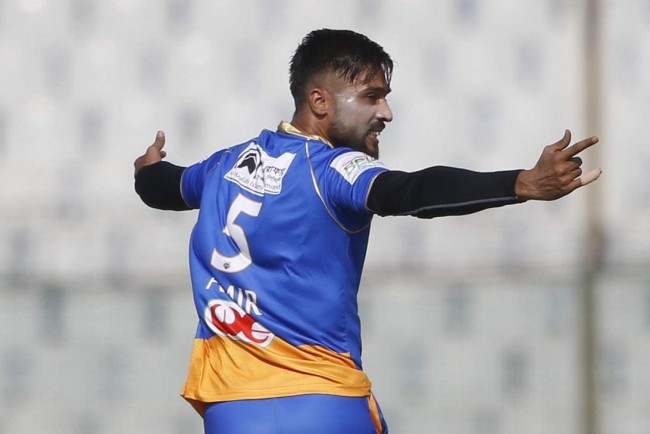 Mohammad Amir came up with an intriguing display of fast bowling to script a new BPL bowling record and in doing so propelled Khulna Tigers to the final of the Bangabandhu Bangladesh Premier League (BBPL) at first attempt.

Alongside him, opener Nazmul Hossain Shanto also dazzled in impeccable way to crush Rajshahi Royals by 27 runs in the first Qualifier at Sher-e-Bangla National Cricket Stadium on Monday.

Shanto struck 57 ball-78 not out before Amir gave a talismanic impetus with ruthless bowling that saw him claimed his career and BPL best 6-17 in four overs.

He eclipsed his compatriot Mohammad Sami’s 5-6 to script new record in history of BPL.

The hope of Rajshahi is yet to be dismissed as they would take on Chattogram Challengers in second Qualifier on Wednesday to give another shot to the final. Chattogram earlier made them available for the second Qualifier, beating Dhaka Platoon by seven wickets in Eliminator game.

Shanto who smashed a blistering 57 ball-115 not out in a record-chase against Dhaka Platoon in last group match 48 hours ago, thrived in slow pitch as well as he batted throughout the innings to steer Khulna to competitive 158-3.

Mohammad Amir made it more than enough, with a vicious show of fast bowling that saw Rajshahi being dismissed for 131 in 20 overs.

The Pakistan recruit indeed dented Rajshahi’s hope in his first spell in which he snared four wickets to leave them at tittering 23-5.

But with the pitch making the task tougher for batsmen, Shanto held the key for Khulna to give the bowlers something to work on.

Shanto who struck seven fours and four sixes in his knock kept one end intact after a shaky start but treated the bowlers in disdain when it mattered most.

Irfan dealt a double blow in the third over, dismissing Mehidy Hasan Miraz (8) and inform Rilee Rossouw for naught, leaving Khulna a precarious 15-2.

Khulna was strangled following the early fall of two inform batsmen while the Rajshahi bowlers imposed more pressure, bowling with much determination and passion.

But Shanto with the ably support of Shamsur Rahman kept the scoreboard ticking if not at faster pace.

They shared 78 runs for third wicket stand after which Ravi Bopara made a breakthrough claiming the wicket of Shamsur for 31 ball32.

Captain Mushfiqur Rahim joined Shanto but couldn’t make much impact as he retired hurt following a hamstring injury. Before then he scored 21 off 16 with two fours.

Shanto gave the late impetus along with Najibullah Zadran (12 not out) to push the side past 150, which looked unlikely at one phase.

Irfan returned figures of 2-13 in four overs while Bopara took 1-24.

As the dew was supposed to neutralize the effect of the bowlers, Khulna’s total not looked so daunting.

But Amir used the shine of the new ball to swing it admirably before dew softened the ball and in doing so sliced the half of the Rajshahi batting line up in first powerplay, with support from Robbie frylinck.

Amir first rattled the stump of inform Liton Das (2) in the third ball of the first over before he came back with double strike in his second over, dismissing Afif Hossain (11) and Alok Kapali (0). Frylinck had the better of Ravi Bopara (1) after which Amir genuinely killed any chance of Rajshahi to hit back, removing captain Andre Russel for naught.

Amir could have ended his first spell with five wickets had Shamshur Rahman not dropped the catch of Farhad Reza who fended a rising Amir-delivery to fine leg.

But Farhad couldn’t make his life count as he charged Shahidul Islam needlessly to throw his wicket, leaving Rajshahi 33-6.

With wickets tumbling frantically, Shoaib Malik, who came to bat at No. 3 position saw the happenings from other end. Indeed before he gave it a shot, the match was all over. He eventually fell for Amir’s sixth wicket after blasting a valiant 80 off 50, hitting 10 fours and four sixes. Mehidy Miraz then cleaned up the tail to dismiss Rajshahi.