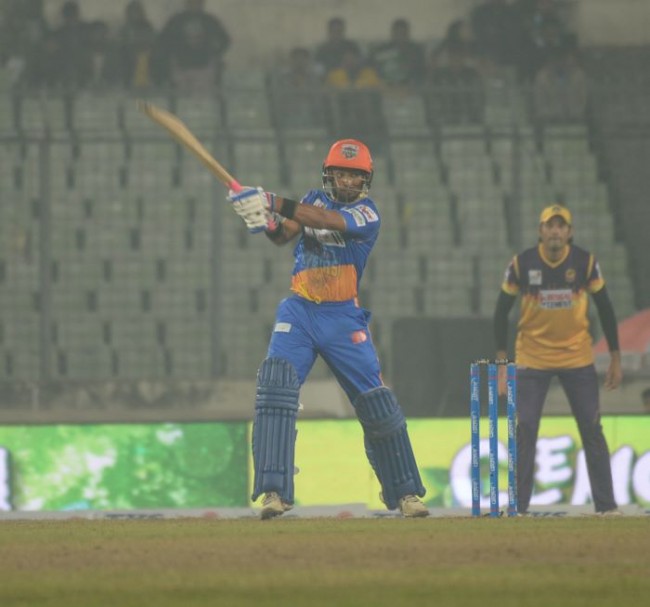 Opener Nazmul Hossain Shanto proved his 57 ball-115 not out in previous game was not a one-off incident as he continued his blistering form, hitting a 57 ball-78 not out in a tougher pitch to help Khulna Tigers post 158-3 against Rajshahi Royals in the first Qualifier of Bangabandhu Bangladesh Premier League (BBPL) at Sher-e-Bangla National Cricket Stadium on Monday.

The winner of the game will seal the final of BBPL straightway while the loser will play the second Qualifier game against Chattogram Challengers on Wednesday.

Shanto struck seven fours and four sixes in his knock which gave the side something to work on after a slow start.

Irfan dealt a double blow in the third over, dismissing Mehidy Hasan Miraz (8) and inform Rilee Rossouw for naught, leaving Khulna a precarious 15-2.

Khulna was strangled following the early fall of two inform batsmen while the Rajshahi bowlers imposed more pressure, bowling with much determination and passion.

But Shanto with the ably support of Shamsur Rahman kept the scoreboard ticking if not at faster pace.

They shared 78 runs for third wicket stand after which Ravi Bopara made a breakthrough claiming the wicket of Shamsur for 31 ball32.

Captain Mushfiqur Rahim joined Shanto but couldn’t make much impact as he retired hurt following a hamstring injury. Before then he scored 21 off 16 with two fours.

Shanto gave the late impetus along with Najibullah Zadran (12 not out) to push the side past 150, which looked unlikely at one phase.

Irfan returned figures of 2-13 in four overs while Bopara took 1-24.