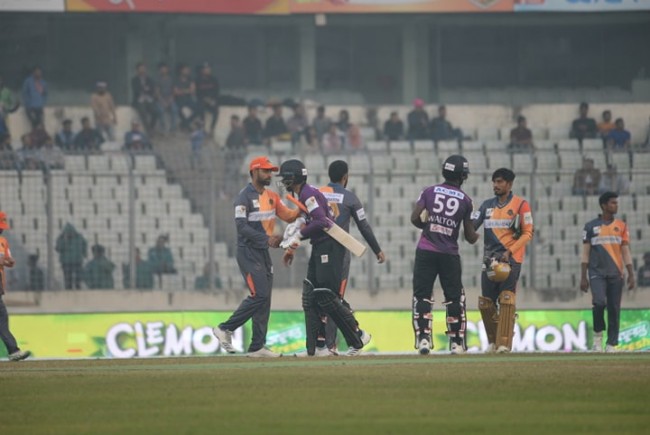 Despite a slow-paced innings by Chris Gayle, Chattogram Challengers effortlessly outclassed Dhaka Platoon by seven wickets in Eliminator game to stay alive for the final of the Bangabandhu Bangladesh Premier League (BBPL).

The defeat meant, Dhaka was eliminated from the race straightway.

Dhaka Platoon recovered from 60-7 to amass a 144-8, thanks to a whirlwind 41 ball-64 not out from Shadab Khan at Sher-e-Bangla National Cricket Stadium on Monday but looked pretty smaller by any means in a high-octane game.

Chattogram made a mockery with the target and reached to the victory, making 147-3 in 17.4 overs with captain Mahmudullah Riyad fittingly sealed the deal, hitting consecutive two sixes.

Chris Gayle was the highest scorer for Chattogram with 38 but it came from 49 balls.

His consumption of so much deliveries was supposed to put an adverse impact on the team but it was well covered by his fellow opener Ziaur Rahman who made 25 off 12 with three fours and two sixes and Imrul Kayes’s 32 off 22, that included one four and three sixes.

Captain Mahmudullah then struck 34 not out off just 14, smashing four sixes to ensure that there wouldn’t be any hiccup in their aspiration to stay alive for the BBPL final.

With little resources, Dhaka needed an early breakthrough to impose any kind of pressure to Chattogram.

Gayle and Ziaur Rahman shared 42 runs for the opening stand to keep the team in good stead, making Dhaka’s plan in disarray state.

Even though Gayle was going slowly, following the departure of Ziaur, Kayes kept the flow before being dismissed by Shadab Khan.

Gayle was also removed by Shadab Khan without covering up his slow start as Mashrafe Bin Mortaza who was playing the game with 14 stitches with his left hand, took the catch with one hand.

With Chattogram reeling to 102-2 in 14.4 overs, it was still anybody’s game but captain Mahmudullah Riyad quelled any kind of tension, with a well-composed knock that sailed the side home without any fuss.

Chadwick Walton gave him the support with 12 not out.

Shadab also contributed in batting to make sure that it wouldn’t be a cake-walk victory for Chattogram.

The Pakistan recruit smote five fours and three sixes in his 41 ball-64 not out, highest T20 knock, which led Dhaka to amass 67 runs in the last five overs.

After being sent to bat first, Dhaka top order, sans Mominul Haque, fared badly to be reduced to 60-7 with Ryad Emrit and Rubel Hossain ripping through their batting line up.

Amongst those runs, Mominul alone scored a run-a-ball-31, with three fours and one six.

Shadab then shared a 44-run partnership with Thisara Perera for the eighth wicket stand in which the latter contributed 13 ball-25 with three fours and one six.

Rubel Hossain removed Perera to give them a further setback. But Shadab remained unfazed by it and played some powerful knocks towards the end to help the side propel past 140.