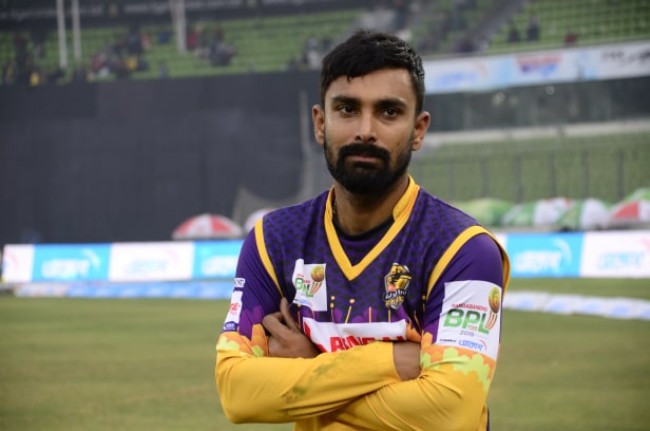 The knock that was studded by 11 fours and one six, was Liton’s second consecutive and third half-century in the tournament.

Thanks to his knock, Rajshahi effortlessly raced to the victory with 156-2 in just 17.4 overs, overhauling Chattogram’s 155-5.

By virtue of the victory Rajshahi for the time being moved to the top of the point table with 16 points from 12 matches and also confirmed that regardless of the result between the Dhaka Platoon and Khulna Tigers later at night, they would be in top two positions.

Guaranteed to be in top two positions means they would play the first Qualifier Game against the opposition between Dhaka and Khulna on Monday.

The outcome also confirmed that Chattogram who has now 16 points in 12 games, would play the Eliminator game, vastly because of their poor run rate.

Both Dhaka Platoon and Khulna Tigers, have now 14 points and the winner would take their point to 16 to edge Chattogram by net-run-rate, pushing them to third position.

Liton and his fellow opener Afif Hossain shared an 88-run for the opening stand in just 10.2 overs to make the game a one-way traffic, with Afif contributing 32 off 31, hitting one four and a six.

Liton then added another 50-run with Shoaib Malik before he was trapped leg-before by a delivery of Ziaur Rahman that kept low.

Malik was unbeaten on 43 off 25, hitting three fours and two sixes.

Earlier, skipper Mahmudullah Riyad struck an unbeaten 48 off 33 as Chattogram Challengers recovered from a hiccup halfway through the innings to give the bowlers something to defend.

The opening pair of Chattogram—Chris Gayle and Junaid Siddique gave the side a decent start after Rajshahi sent them to bat first.

Junaid made a run-a-ball-23 before being dismissed by Shoaib Malik but Gayle looked on his way to big score.

As the Caribbean stalwart was completely set in the crease, Afif Hossain gave Rajshahi a crucial breakthrough, having dismissed Gayle who eventually scored 23 off 21 with one four and two sixes.

Gayle’s dismissal slowed down the innings and to Chattogram’s frustration, their inform batsman Imrul Kayes also couldn’t make his start count as Taijul Islam got rid of him after his 18 ball-19.

Chattogram got a further setback losing Chadwick Walton for 4 before Nurul Hasan Sohan and Mahmudullah Riyad helped the side hit back and paced the innings.

Sohan though was removed after 17 ball-30, hitting four fours and one six, Mahmudullah stayed till the end and pushed the side past 150.

Mahmudullah struck two fours and three sixes in his knock.