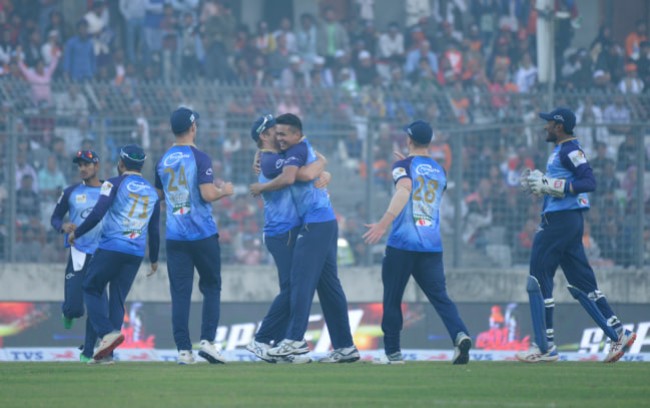 Rangpur Rangers won five matches in their last eight outings but still failed to make it play-off of the Bangabandhu Bangladesh Premier League (BBPL), vastly due to their four straight defeats at the outset of the tournament.

But that couldn’t take the gloss off from what they showed as they came up with yet another spirited performance in their last match against Dhaka Platoon at Sher-e-Bangla National Cricket Stadium on Friday.

With just 149-9 on the board, they performed doggedly to make it count by restricting a star-studded Dhaka to 138-9 and thereby won it by 11 runs to end the campaign on a high.

Lewis Gregory played a key role in their victory with a sterling all-round performance, clobbering a 32 ball-46 with five fours and two sixes and claiming 1-25.

Gregory’s 46 was complemented by Al-Amin Junior who hit 24 ball-35, smashing four fours and one six. Jahurul Islam Omee contributed with 28.

Following a shaky start that saw them lost captain Shane Watson (10) and Cameron Delport (6) in fifth over with the scoreboard reading 28-2, Gregory gave the innings much-needed pace.

Rangpur soon was reduced to 50-3 after Naim Sheikh was dismissed by Shadab Khan for 21 ball-17.

Gregory and Al-Amin added 49 runs for the fourth wicket stand, keeping the run rate quite high.

However Thisara Perera inflicted a collapse and stalled the progress of Rangpur, firstly removing Gregory. Shadab Khan then got rid of Al-Amin and Rangpur crumbled under pressure to be all out with a total that looked not pretty.

Perera returned figures of 3-23 while Shadab Khan ended with 2-25.

Rangpur got the much-needed momentum to win the game despite that small total when they trapped Anamul Haque Bijoy (5) run out.

With Tamim Iqbal struggling to pace the innings, Rangpur got the chance to impose the pressure and reaped the rewards when Arafat Sunny (2-29) dealt a double blow, dismissing Tamim for 33 ball-34 and Mahedi Hasan for 20.

Even though their strike bowler Mustafizur Rahman leaked runs, fast bowler Taskin Ahmed (2-25) and Lewis Gregory came up with fire to slice the middle order before Pakistan recruit Junaid Khan (2-22) played his part in death overs.

However drama unfolded in the last over when Dhaka needed 23 with one wicket remaining. Mashrafe smashed first ball, which turned out to be no delivery, for boundary and also got another boundary courtesy to wicket-keeper’s mistake.

It looked Mashrafe was going to produce a miracle out of nothing but Gregory held his nerve, corrected his length and denied Dhaka eventually.