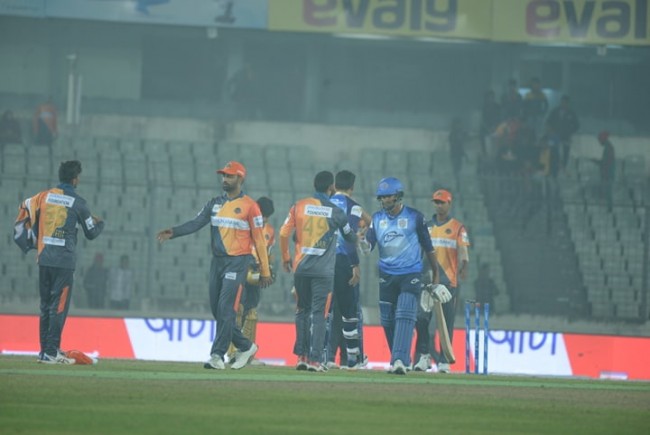 With just 145-9 on the board, Dhaka Platoon fought ruthlessly to achieve a staggering 61-run victory over Rangpur Rangers at the Sher-e-Bangla National Cricket Stadium on Wednesday.

By doing so, they helped them move into the play-off of the Bangabandhu Bangladesh Premier League (BBPL) and at the same time ruined Rangpur’s hope of staying alive in the tournament.

The big victory saw Dhaka claiming the second spot with 14 points from 10 matches and joined Chattogram Challengers and Rajshahi Royals to seal the lay-off spot. Rangpur now have just 8 points from 11 games.

Rangpur’s chance to stay alive in the tournament looked bright when they restricted Dhaka to 145-9, a score that appeared to be achievable with quite ease given how the dew neutralized the bowlers’ effect at game under lights.

However Dhaka bowlers bowled in merciless manner to skittle Rangpur out for 84 in just 15.3 overs.

Before dew came into play, Dhaka bowlers sliced Rangpur’s half of the batting order to leave them at precarious 39-5 in just seventh over. Off-spinner Mahedi Hasan led the charge with 3-13 and was impeccably supported by captain Mashrafe Bin Mortaza (2-18), Faheem Ashraf (2-26) and Shadab Khan (2-14).

Mahedi began the rot with a double strike in the first over, dismissing inform Mohammad Naim (4) and handing Rangpur captain Shane Watson a first ball-duck.

Cameron Delport though seemed to bring the side back in contention, he was undone by Faheem Ashraf after hitting 20 off 12.

Knowing that a big partnership could stall their progress, Dhaka bowlers came up with more dazzling effort which paid high dividends.

Mashrafe Bin Mortaza got the better of Lewis Gregory (5) and Hasan Mahmud took out Fazle Mahmud (3) to literally break the spine of Rangpur.

Al Amin Hossain Junior resisted with 23 but it came to an end when he top-edged one off Mashrafe delivery.

Thereafter no batsmen came up with any resistance as two Pakistan recruits—Faheem Ashraf and Shadab Khan cleaned up the tail.

Earlier, fast bowlers Taskin Ahmed (3-32) and Mustafizur Rahman (3-34) were the key in holding back Dhaka to a small total and gave the side a chance to gun down it quickly to improve the run rate also before their batters came up with dismal show.

Opener Tamim Iqbal was the highest scorer for Dhaka with 38 ball-40, sending the ball across the rope for five time. Shadab Khan paced the innings towards the end with an unbeaten 31 off 19 with one four and three sixes.

No batsman of Dhaka from the middle order stood tall in the face of some disciplined bowling attack of Rangpur.

Mohammad Nabi, who scalped 2-21 in four overs stifled Dhaka half-way through the innings and Taskin then ripped them through, removing Tamim Iqbal and Asif Ali (9) in same over.

Mustafizur Rahman took the crucial scalp of Thisara Perera (19) who looked threatening in his brief stay in the crease.

Mustaifuzr however produced his stock weapons cutter and slower to good effect to clean up the tail also.