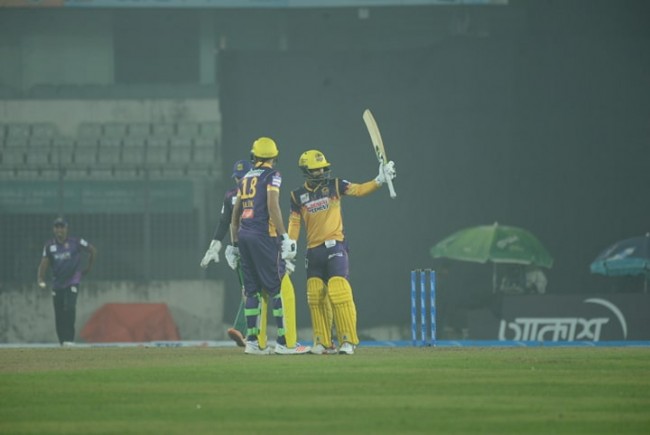 Opener Liton Das smashed a 45 ball-56 as Rajshahi Royals compiled a decent 166-8 against Chattogram Challengers in their 11th game of the Bangabandhu Bangladesh Premier League (BBPL) at Sher-e-Bangla National Cricket Stadium on Tuesday.

With both the team sitting at the top two positions of the point table with 14 points from 10 matches, the game will decide who would take the solo lead. Rajshahi at the moment edged Chattogram by net-run-rate to be at the top position.

Liton Das who struck five fours and two sixes in his knock drove the side after the early departure of inform Afif Hossain Dhruvo as Rajshahi was sent to bat first.

Shoaib Malik and captain Andre Russell got the start but could bat deep, which strangled Rajshahi half-way through the innings after the departure of Liton.

Shoaib Malik scored 28 and Russell made 20.

Farhad Reza however came up with some lusty blow at the death, as he blasted 21 off 8 with one four and two sixes that propelled Rajshahi past 160.

Fast bowler Rubel Hossain and medium pacer Ziaur Rahman were key in stifling Rajshahi at the middle of the innings, which dented their progress to score bigger one. Rubel and Ziaur scalped three wickets each, conceding 20 and 18 runs respectively.