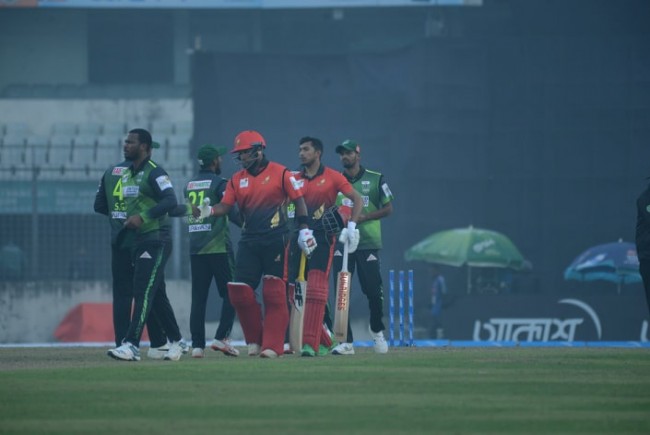 When they targeted a victory to end the Bangabandhu Bangladesh Premier League (BBPL) with some winning-memory, Sylhet Thunder found them in another embarrassing state for one last time as they tasted a humiliating five-wicket defeat to Cumilla Warriors at Sher-e-Bangla National Cricket Stadium on Tuesday.

The defeat took their tally to 11 in 12 matches and at the same time, conceded seventh straight defeat, following their lone victory against Khulna Tigers by 80 runs in their fifth match.

Sylhet’s defeat was on the cards when they put up another wretched batting performance to be restricted to 141-5 after being sent to bat first. With such small total on the board, it was almost impossible to resist Cumilla, bolstered by the return of Dawid Malan.

Sylhet still raised a prospect of unlikely victory, reducing Cumilla to 32-3 but Malan played a superb 49 ball-58 as Cumilla sealed the deal with 142-5 in 19.1 overs.

Soumya Sarkar played a perfect foil to his captain, striking an unbeaten 53 off 30, with six fours and two sixes. It was his second half-century in the tournament and overall third in BPL tournament.

Soumya ensured the victory with a boundary of long-off region off Johnson Charles bowling.

The victory kept Cumilla’s aspiration to seal play-off spot alive as they clinched a fifth win in the 10th match and maintained fifth position.

Malan and Soumya indeed steadied the ship after a shaky start as they combined for a 72 off 48 for the fourth wicket stand to edge the side closer to the victory.

Ebadot Hossain who conceded just three runs in his first two overs to suffocate Cumilla batsmen returned in second spell to dismiss Malan who struck two fours and as many sixes in his 58.

With the side reeling to a catastrophic situation, Malan and Soumya had a slow start but Malan broke the shackle as the time progressed to motivate Soumya also to come up with his ruthless best.

Sylhet sensed a chance after the departure of Malan and then dismissing David Wiese (13) but Soumya ensured there wouldn’t be more drama in quest of keeping their play-off race alive.

Nayeem Hasan was the most successful bowler for Sylhet with 3-21 in four overs, through which he reduced Cumilla to 32-3. Ebadot finished with 1-26 after completing his bowling quota.

Sylhet made a slow start with captain Andre Fletcher particularly failing to get it tough to score runs.

His fellow opener Abdul Mazid batted till the last over and scored team’s highest 45 off 40 with two fours and one six. Fletcher was out on 22 after which Johnson Charles’ showed an intention to pace the innings.

Charles made 15 ball-26, including one four and two sixes.

Charles’ dismissal further stifled the innings with Cumilla bowlers coming up with some disciplined bowling.

Sri Lankan recruit Jeevan Mendis took some big hit towards the end to blast 11 ball-23 with two fours and one six as Sylhet could propel the score past 140.