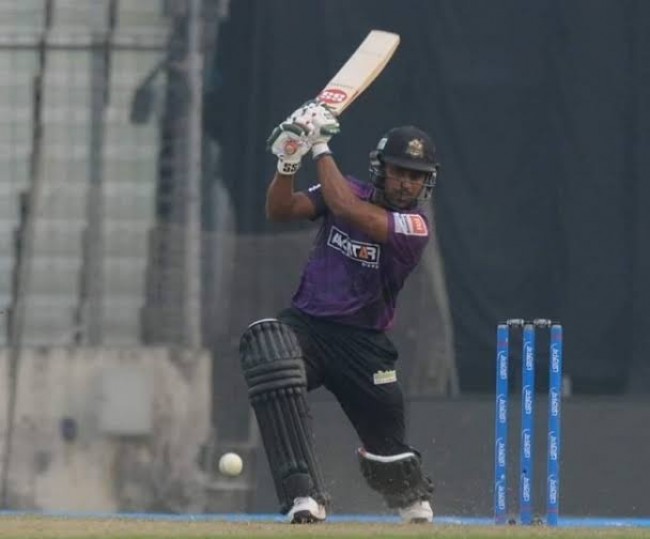 Chattogram Challengers whacked Khulna Tigers past by six wickets after their pacers ran riot in a helpful condition at Sylhet International Cricket Stadium on Saturday.

By virtue of this victory, Chattogram sealed the play-off phase as the first team and also moved to the top of the point table with 14 points from 10 games.

The defeat, Khulna’s third in last five matches, kept them in fourth place with 10 points from nine matches.

Fast bowler duo Rubel Hossain and Mehedi Hasan led the charge with an intriguing show of swing bowling as they moved the ball admirably to bundle Khulna out for 121 in 19.5 overs before managing 124-4 for victory in 18.1 overs.

Rubel finished with 3-17 in 3.5 overs while Rana returned figures of 3-29 after stand-in captain Imrul Kayes who returned to the team, recovering from the injury, won the toss and opted to bowl first.

The duo left Khulna reeling to 14-3 in just fourth over with Mehedi Rana dealing the double blow in his first over, dismissing Mehidy Miraz (4) and Hashim Amla (8), who was playing his first match in the tournament.

Inspired by the bowling of Rubel and Rana, the other bowlers also came up with fire as Khulna batsmen found them in a position of embarrassment.

Rilee Rossouw and captain Mushfiqur Rahim still showed their class against a high class bowling in favourable wicket as they kept the side flowing, batting with huge patience.

But a needless scoop shot against Ziaur Rahman’s bowling led Mushfiqur’s downfall for 29, bringing an end to the 49-run partnership for the fourth wicket.

Rossouw kept fighting it out and before being dismissed by Kesrick Williams he struck 48 off 40 with two fours and as many sixes. The rest of the batsmen however failed to put up any resistance as they were bowled out to a paltry total.

Rana and Rubel’s three-for was complemented by Williams’s 2-21.

Lendl Simmons and Junaid Siddique made a decent start in pursuit of the small target and shared 69-run in 10 overs, before Alis Al Islam broke through, claiming the wicket of Simmon. The West Indies recruit of Chattogram clobbered three fours and two sixes in 36 off 28.

Chattogram then lost some wickets in quick succession with Junaid perishing to a straight delivery of Mehidy Hasan Miraz to be out on 38 off 39, studded with four fours and one six while Robbie Frylinck uprooted Asela Gunaratne’s wicket with a perfect Yorker for naught and had Chadwick Walton (7) caught by Shamsur Rahman.

But the target by then was in sight and Imrul Kayes, with the support of Nurul Hasan Sohan sealed the deal. Kayes was unbeaten on 27 ball-30, including two fours and two sixes while Sohan who brought up victory with boundary through long-off region was on 7.

Frylinck was the most successful bowler for Chattogram with 2-20 while Alis and Mehidy Miraz took one wicket apiece.