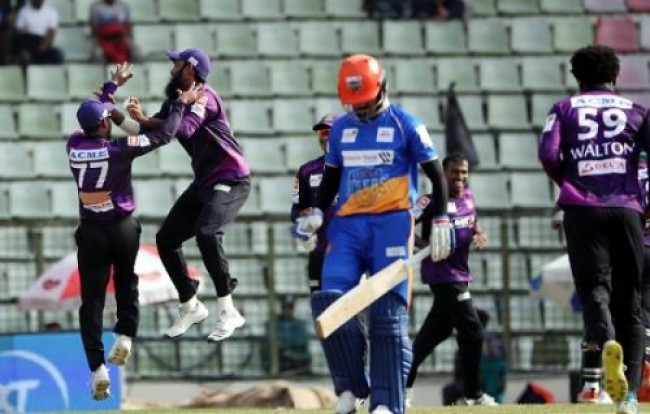 Fast bowlers Rubel Hossain and Mehedi Hasan Rana shared six wickets between them in a display of intriguing swing bowling as Chattogram Challengers shot Khulna Tigers out for paltry 121 in 19.5 in their 10th game in the Bangabandhu Bangladesh Premier League (BBPL) at Sylhet International Cricket Stadium on Saturday.

Rubel finished with 3-17 in 3.5 overs while Rana returned figures of 3-29 after stand-in captain Imrul Kayes who returned to the team, recovering from the injury, won the toss and opted to bowl first.

The duo left Khulna reeling to 14-3 in just fourth over with Mehedi Rana dealing the double blow in his first over, dismissing Mehidy Miraz (4) and Hashim Amla (8), who was playing his first match in the tournament.

Inspired by the bowling of Rubel and Rana, the other bowlers also came up with fire as Khulna batsmen found them in a position of embarrassment.

Rilee Rossouw and captain Mushfiqur Rahim still showed their class against a high class bowling in favourable wicket as they kept the side flowing, batting with huge patience.

But a needless scoop shot against Ziaur Rahman’s bowling led Mushfiqur’s downfall for 29, bringing an end to the 49-run partnership for the fourth wicket.

Rossouw kept fighting it out and before being dismissed by Kesrick Williams he struck 48 off 40 with two fours and as many sixes. The rest of the batsmen however failed to put up any resistance as they were bowled out to a paltry total.

Rana and Rubel’s three-for was complemented by Williams’s 2-21.

Chattogram could seal the play-off in case of victory in the game.